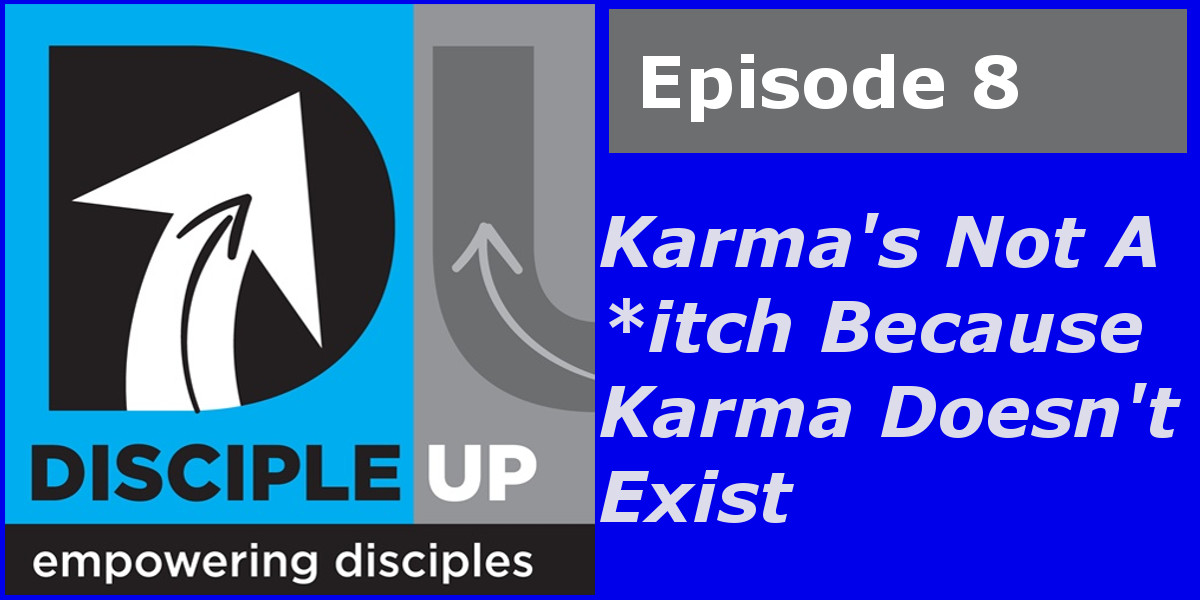 Karma’s Not A *itch Because Karma Doesn’t Exist

From all sides you hear about Karma today – why I’m doing this episode – Christians say it too!

(in Hinduism and Buddhism) the sum of a person’s actions in this and previous states of existence, viewed as deciding their fate in future existences.

There’s a natural law of karma that vindictive people, who go out of their way to hurt others, will end up broke and alone. Sylvester Stallone

I’m a true believer in karma. You get what you give, whether it’s bad or good. Sandra Bullock

I believe in karma, and I believe if you put out positive vibes to everybody, that’s all you’re going to get back. Kesha

What it really is:

Problems or successes, they all are the results of our own actions. Karma. The philosophy of action is that no one else is the giver of peace or happiness. One’s own karma, one’s own actions are responsible to come to bring either happiness or success or whatever. Maharishi Mahesh Yogi

Every single unfortunate thing that happens, including, for instance, the murder of my parents, I am responsible for. I am responsible for being the son of two people who got murdered. I didn’t cause their murder. But if I’m suffering because of it, it’s my karma that I have manifested in this lifetime in this particular set of circumstances. Patrick Duffy (Buddhist)

Karma is only in space time and causality. Your real self resides non-locally. Deepak Chopra

Karma brings us ever back to rebirth, binds us to the wheel of births and deaths. Good Karma drags us back as relentlessly as bad, and the chain which is wrought out of our virtues holds as firmly and as closely as that forged from our vices. Annie Besant

Attachment and aversion are the root cause of karma, and karma originates from infatuation. Karma is the root cause of birth and death, and these are said to be the source of misery. None can escape the effect of their own past karma. Mahavira

Karma is inseparably linked to reincarnation – that’s who you “get what’s coming.” Your return isn’t for this life – it’s in the next. YET – you don’t know how you lived so how can you learn from the experience?

There is no grace in Karma, only the wheel of death and rebirth that crushes you and grinds you into nothing eventually (the end goal of Hinduism is to realize individuals don’t exist, we are all part of the divine, like a drop of water realizing it’s just part of the ocean.).
Source of these quotes: Read more at: https://www.brainyquote.com/quotes/keywords/karma.html

The moment you enlist in the army of God, you personally become a target. You need to remember that if you’re living for and walking with Jesus Christ, the powers of darkness are aligned against you.

When people say, ‘I believe in Jesus’, look them straight in the eye and ask, ‘Which one?’

Truth by definition is exclusive. If truth were all-inclusive, nothing would be false.

It should be carefully noted that Jesus did not say, “I am one of the equally good ways” or “I am a better way than the others, I am an aspect of truth; I am a fragment of the life.” Instead, His claim was absolute, and allegiance to Him as the Savior of the world, was to take precedence over all the claims of men and religions.

Text without context is pretext.

Is karma Christian? No.

7  Do not be deceived: God is not mocked, for whatever one sows, that will he also reap. 8  For the one who sows to his own flesh will from the flesh reap corruption, but the one who sows to the Spirit will from the Spirit reap eternal life. 9  And let us not grow weary of doing good, for in due season we will reap, if we do not give up. 10  So then, as we have opportunity, let us do good to everyone, and especially to those who are of the household of faith. Galatians 6:7-10 (ESV)

Reincarnation Is Not True:

1  As he passed by, he saw a man blind from birth. 2  And his disciples asked him, “Rabbi, who sinned, this man or his parents, that he was born blind?” 3  Jesus answered, “It was not that this man sinned, or his parents, but that the works of God might be displayed in him. 4  We must work the works of him who sent me while it is day; night is coming, when no one can work. 5  As long as I am in the world, I am the light of the world.” John 9:1-5 (ESV)

27  And just as it is appointed for man to die once, and after that comes judgment, 28  so Christ, having been offered once to bear the sins of many, will appear a second time, not to deal with sin but to save those who are eagerly waiting for him. Hebrews 9:27-28 (ESV)

What should disciples do?

In the book, Bono: iIn Conversation with Mishka Assayas, Bono commented, “I’d be in big trouble if Karma was going to finally be my judge… I’m holding out for grace. I’m holding out that Jesus took my sins onto the Cross…”