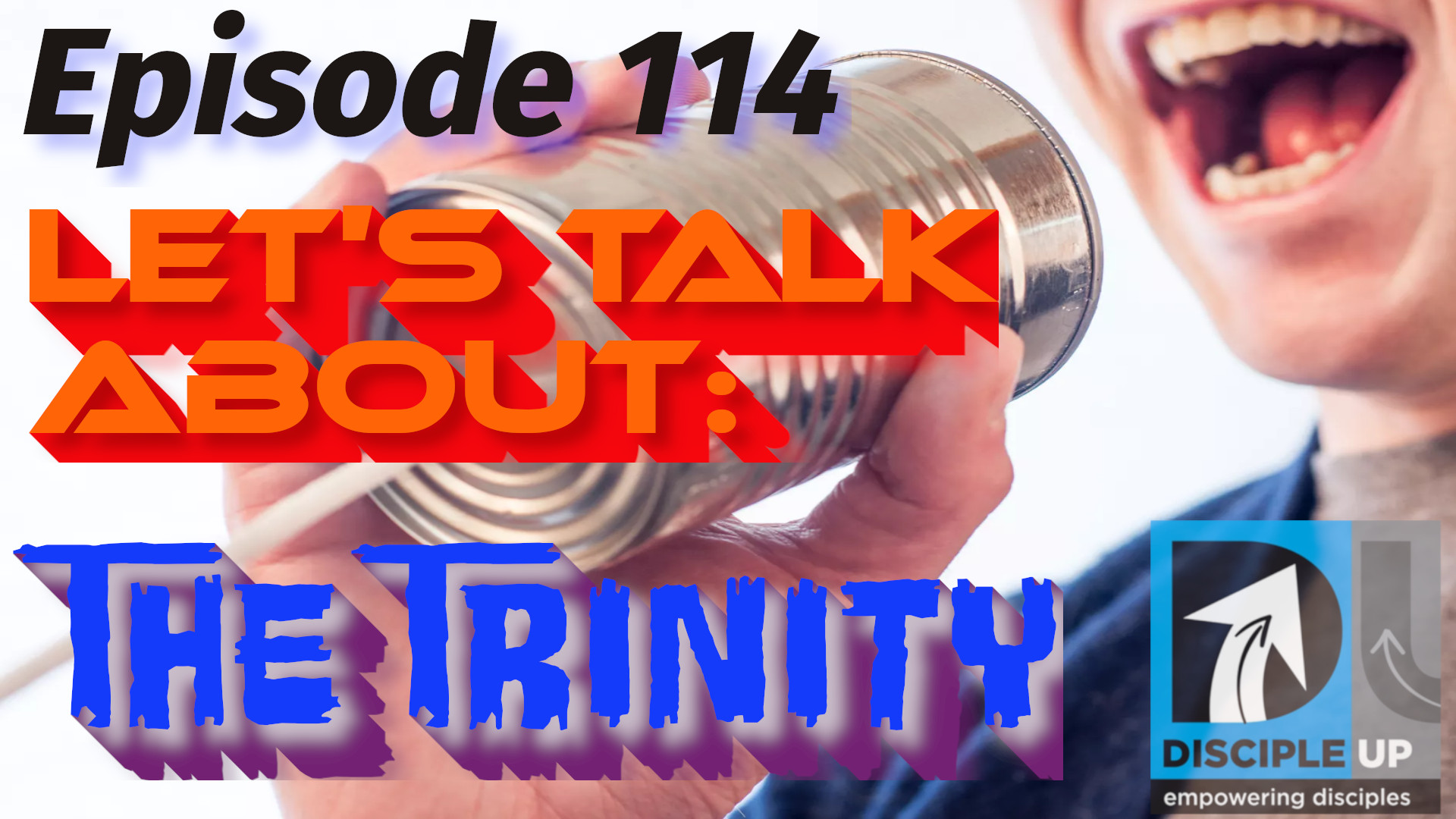 The notes for this episode were taken from an old series that I wrote quite a few years ago called Basic Bible Questions. Also, don’t forget to check out http://www.waltermartin.com/ for great Bible teaching!

One of the most frequently misunderstood subjects in the Bible and the Christian faith is the Trinity. If you have questions about the Trinity – welcome to the club! Almost everyone does! Questions like: How is it possible for three to be one? What do we mean when we say they are one? What is the doctrine of the Trinity anyway?

This chapter will attempt to give basic answers to these and other questions about the Trinity. Please don’t think of this as the last word, or the most authoritative word, on the topic. Rather think of this as a basic explanation of this important biblical truth.

There is only one God! Not three or four or five or hundreds or more, only one! While many cults and other religions deny this, it remains the cornerstone of biblical truth about God. All Jewish and Christian faith is based on the unshakable conviction that this is true.

The core of the Old Testament faith is found in Deuteronomy 6:4, “Hear, O Israel: The Lord our God, the Lord is one.”  Rabbi’s call this the Shema. It declares the unique biblical view that there is only one God.

God Himself says the same thing, “Do not tremble, do not be afraid. Did I not proclaim this and foretell it long ago? You are my witnesses. Is there any God besides me? No, there is no other Rock; I know not one.”  Isaiah 44:8

God also had this to say about the issue: “You are my witnesses,” declares the Lord, “and my servant whom I have chosen, so that you may know and believe me and understand that I am he. Before me no god was formed, nor will there be one after me. I, even I, am the Lord, and apart from me there is no savior. I have revealed and saved and proclaimed– I, and not some foreign god among you.

If God doesn’t know of any other gods, and if He in fact declares that they don’t exist, never have and never will, that ought to settle the matter shouldn’t it? [See the End Notes of this chapter for more Scriptural support of this position.]

The Jewish faith lived by their belief in only one God (a belief called Monotheism) for two thousand years. But in the New Testament we learn something new about this One God. We find that there are three Persons (or Personalities) who are called God.

References Throughout the New Testament

Throughout the New Testament references to the three members of the Trinity abound. For example look at the baptismal formula Jesus gave us: Therefore go and make disciples of all nations, baptizing them in the name of the Father and of the Son and of the Holy Spirit, Matthew 28:19.

Or look at what the Apostle Peter said: who have been chosen according to the foreknowledge of God the Father, through the sanctifying work of the Spirit, for obedience to Jesus Christ and sprinkling by his blood… 1 Peter 1:2.

Then there is Paul’s blessing (or wish prayer as some call it) on the Corinthians:  May the grace of the Lord Jesus Christ, and the love of God, and the fellowship of the Holy Spirit be with you all. 2 Cor. 13:14.

From these references (and many others can be found) it’s obvious that the writers of the New Testament believed in the Trinity even if they never used the word Trinity.

Now it’s time for a little logic. Follow this chain of thought through and see if it doesn’t make sense to you.

Therefore one or the other of the following two conclusions must be true:

That is what Christians have always believed that the Bible teaches – that is the position Christians everywhere have held.

I took debate in college and one of the things they constantly stressed to us was the importance of defining your terms. If you can’t define it, you can’t believe it or defend it! Below is a good working definition of the Trinity, this is the classical formula that has been used and believed for centuries.

“Within the nature of the one eternal God, there are three eternal Persons, the Father, the Son and the Holy Spirit.”

Three Being One, Not One Being Three

Having defined the Trinity, it’s important to look a bit deeper at what it means. The Trinity isn’t one God acting like three different persons, or becoming them one after the other, or at different points in time.

This view, known by various names but perhaps best known today as the “Oneness” doctrine (held by the United Pentecostal Church among others) is not what the Bible teaches. It is also not what the Church has taught through out the ages or what Christians have believed.

To illustrate why this interpretation can’t be right let’s look at a couple of situations from the life of Christ and imagine how different they would be if the Oneness doctrine was correct.

When all the people were being baptized, Jesus was baptized too. And as he was praying, heaven was opened and the Holy Spirit descended on him in bodily form like a dove. And a voice came from heaven: “You are my Son, whom I love; with you I am well pleased.” Luke 3:21-22

Here at one place and at the same time we have the Son being baptized, the Spirit descending on Him like a dove, and the Father speaking from heaven. Now either God is a ventriloquist or a magician or else the three members of the Trinity co-exist simultaneously together.

If the Oneness doctrine is correct then in the above example God deliberately deceived us by pretending to be three persons when He’s really only one! The same is true of the Transfiguration, look at what God said about Jesus.

While he was still speaking, a bright cloud enveloped them, and a voice from the cloud said, “This is my Son, whom I love; with him I am well pleased. Listen to him!” Matthew 17:5

If the Oneness view is correct then God the Father either lied here – or He made a mistake. He should have said, “This is my beloved me, with me I am well pleased, listen to me!”

How Does It Work?

No one other than the members of the Trinity themselves could possibly understand or fully explain the way they co-exist together. However through out the history of the church many different illustrations have been used to help us grasp a little of what the Triune God is like.

You’ve probably seen pictures of an over lapping circles to explain how the three Persons of the Trinity can be one yet separate as well.  Or you may have heard the Trinity compared to an egg or a three-leaf clover (that was St. Patrick’s favorite!). Below are my two personal favorite illustrations.

An Illustration From Nature

Picture a beautiful lake surrounded by towering snow capped peaks on a cold mountain morning. It’s covered with a layer of ice and a dense fog is floating over it.

So it is with members of the Trinity. Their substance is the same, yet they are three distinct Persons. The three are one!

An illustration From Science

Chemists tell us of something they call “The Triple Point of Water.” When you put water into a vacuum tube, pump out all the air and put in under an exact pressure and extremely low temperature, something remarkable happens. Inside the tube the water at the top bursts into steam, the water at the bottom freezes solid, and the water in the middle stays liquid.

H20 is the simplest of all the molecules, yet God has created it so that it reflects His complex nature. If water can do that – why can’t God? The argument against the Trinity that it’s impossible or irrational is simply not true, as I hope I’ve demonstrated here for you.

The Trinity isn’t completely beyond our grasp. We can understand a little bit of what it is and how it works. God created His universe to mirror His nature, so that we could grasp a little of His glory.

It’s not too hard to believe.

Below are some Scripture references that will help you as you study the doctrine of the Trinity, the nature of God and the identity of Jesus.