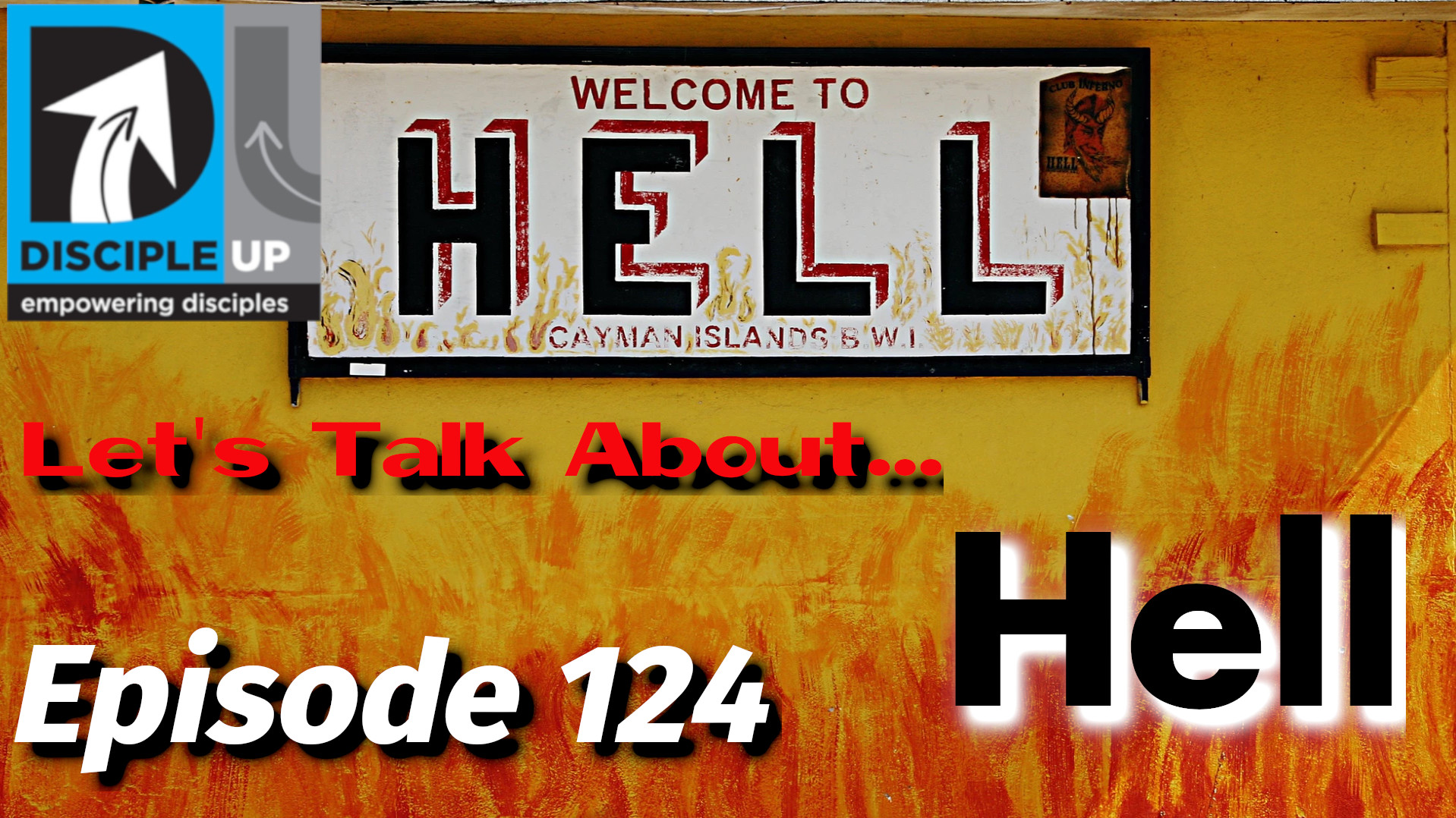 This episode is devoted to a subject we hear precious little about today. This topic is about where, according to the Bible, Satan and those unfortunate enough to have followed him will spend eternity – Hell!

There is probably as much debate, ignorance and unbelief about Hell has there is about any topic found in the Scriptures. Most modern people’s attitudes towards hell might well be summed up in a story told by the late Dr. Walter Martin. After a service in which he had preached on hell he was confronted by an angry man.

“So,” the man almost shouted, “you believe in a God Who enjoys roasting people on a cosmic spit for all eternity?”

Of course Dr. Martin denied that he had ever said any such thing or that the Scriptures taught it. And all true Christians will agree with that answer. This article is devoted to presenting a clear view of the Basic Biblical Teaching on hell.

The Purpose of Hell

To answer the basic questions that most people have about hell, it’s important to see that hell was created with a purpose in mind.

This purpose is told to us by the Lord Jesus in Matt. 25:41 where He says, “Then he will say to those on his left, Depart from me, you who are cursed, into the eternal fire prepared for the devil and his angels.'”

Hell then was created by God, and affirmed by Jesus. The same Jesus Who gave us the Sermon on the Mount also gave us His teaching about the Judgment of God. Hell is an essential part of that judgment. Originally it was created for Satan and his angels (we usually refer to these fallen angels as demons).

Hell then is a place reserved for those who, like Lucifer, choose to rebel against God. By making that choice they are, whether they know it or not, choosing to follow Satan and will end up where he ends up –Hell!

The Perseverance of Hell

Having seen that the Bible teaches that there is indeed a hell, the next question is, how long does it last. The answer is found in 2 Thessalonians 1:8-10. “He will punish those who do not know God and do not obey the gospel of our Lord Jesus. They will be punished with everlasting destruction and shut out of the presence of the Lord and from the majesty of his power…”

Hell is eternal. If it isn’t, as many people today try and teach, then heaven isn’t eternal either! The word everlasting is used of both heaven and hell, you can’t be consistent and say one is eternal while the other isn’t.

Notice how Paul stresses that hell is a place where you are shut out of God’s presence and from experiencing the majesty of His power. This seems to be the ultimate punishment. God is finally revealed and available – and you are shut away from Him. What could be worse?

Our Response to Hell

Many an argument has been had about whether the fire in hell is real fire or not. I believe these arguments miss the point

The main point that Jesus stressed when He spoke of hell was not it’s location, nature or length of the punishment, etc. His main point was something much more simple and practical, as seen in Matthew 5:29-30. “If your right eye causes you to sin, gouge it out and throw it away. It is better for you to lose one part of your body than for your whole body to be thrown into hell…”

His point is obvious – we should do everything anything possible to avoid going to hell!

This point was stressed over and over in the teachings of Jesus. It comes as a big surprise to many to learn who the greatest preacher and teacher on hell was in the New Testament. It was Jesus. That’s right – loving, kind, gentle Jesus taught more about hell than anyone else did in the entire New Testament. In fact the Greek word for hell, Gehenna, is found only once outside of the Gospels!

Why did Christ of all people teach so much on hell? Because as God in human flesh He was only one Who had seen it! Jesus better than anyone knew the horrors of hell, and so used some very strong language to warn us away from it.

Properly understood then, hell becomes the motivation of heaven in giving us salvation by grace. For without it we would all be destined to spend eternity apart from God there.

The Sound of Silence

Today we almost never teach, talk or hear about hell. Most Christians will go far out of their way to avoid mentioning hell to their non-Christian friends. Hell rarely finds it’s way into modern presentations of the Gospel either.

Why? Because the Post-Christian culture we live in has rejected all absolutes.

As a result of this rejection of absolutes we find the doctrine of hell extremely offensive. What could to more offensive to an anything goes culture than hell – which is about as absolute as you can get!

The church too suffers from this. We, along with our culture, ask how a loving God could allow souls to be punished     eternally. Many Christians today cannot accept the doctrine of hell and either ignore it or deny it. In the end it all comes out about the same. We don’t really believe the Biblical doctrine of hell, and we don’t take it seriously. As a result we end up on opposite ends of the spectrum from our Lord Jesus, Who both believed in and took hell extremely seriously!

The terrible truth is that when we approach the doctrine of hell we find ourselves on what seem to be the horns of a dilemma. How can a loving God allow a horror like hell to exist? Even worse – how could He send His creations there with no possibility of parole?

This is the question addressed by The New Bible Dictionary on page 519.

“The fact is on the one hand, God is omnipotent and God is love, and, on the other, eternal retribution is plainly taught in Scripture, raises problems for our minds that in all probability we cannot fully solve. It is easy in such cases to produce a logical answer at the expense of one side of biblical truth, and this has often been done…we must admit that the counsels of God are past the understanding of our finite minds. The reality and eternity of suffering in Gehenna is an element of biblical truth that an honest exegesis cannot evade.”

To which I say -Amen! To deny the doctrine of hell is to deny the teachings of Jesus. He Who was incarnate love taught more on hell than anyone else in the entire Bible.

It is from Him that we must develop our attitude towards hell as a terrible, horrible place to be avoided at all costs!

Spread the Word is the first challenge the doctrine of hell presents us with. Jude wrote of this in Jude 1:20-23, which says in part; “…snatch others from the fire and save them; to others show mercy, mixed with fear…”

Hell does have a place in evangelism. Sometimes it’s necessary to present the fear of God, not just His mercy and Grace to lead people to faith in Jesus Christ.

Personal Humility is also something that a understanding of hell challenges us with. It

strips us of our false pride and draws us closer to God through His Grace – and not our works!

Becoming a Caring Community is another challenge the Bible presents us with as this point. Hear these words from the late, great, Mark Heard,

“But we believe so well, don’t we tell ourselves? Don’t we take exclusive pride that we abide so far from hell? We might laugh together, but don’t we cry alone? For the ashes and dust we’ve swept beneath the holy throne.”

Let us then with love and compassion present the full truth to the world and stand fast in humility on the Word of God.

Hell in The New Testament

Below are all the verses where the word Gehenna (hell) is used in the New Testament.