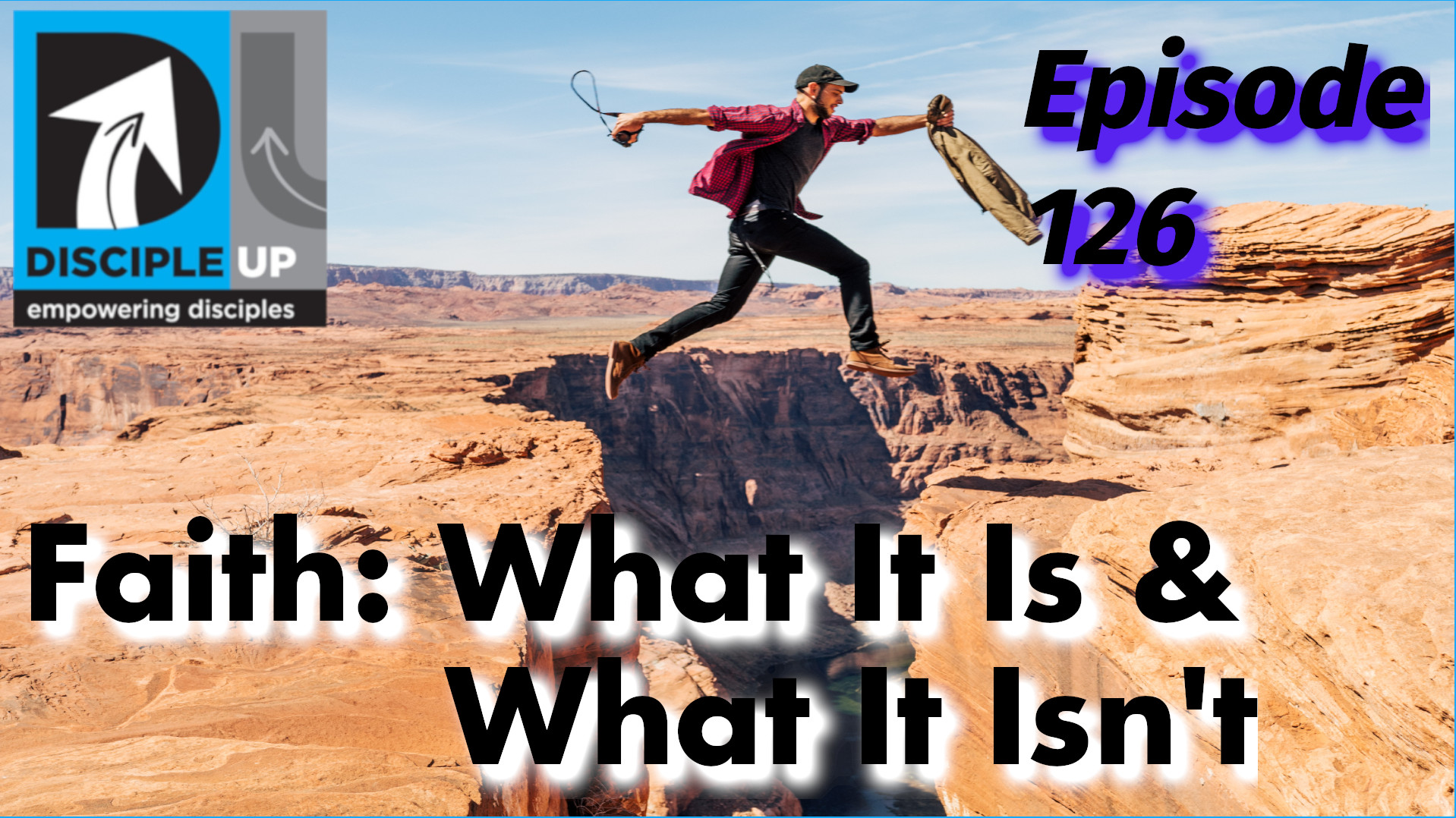 Photo used in cover art by Alex Radelich on Unsplash

International Podcast Day live broadcast on YouTube will be on September 30th at 6:00 PM, Arizona Time, which is the same (till the time change) as California Time. Hope you’ll join me then.

An E-Mail Poured In!

Check out the following Episodes for more information

1  Now faith is the assurance of things hoped for, the conviction of things not seen. Hebrews 11:1 (ESV)

27  By faith he left Egypt, not fearing the king’s anger; he persevered because he saw him who is invisible. Hebrews 11:27 (NIV)

27  by faith he left Egypt behind, not having been afraid of the wrath of the king, for, as seeing the Invisible One–he endured; Hebrews 11:27 (YLT)

where Moses “saw” what was invisible, that’s faith – apprehending what you cannot perceive by the five senses – it’s a way of looking at your entire universe and life, both visible and invisible and understand that God is present and active there. Like Moses we must hold to this in spite of evidence that seems to say He’s not there.

Faith is the ground upon which all real life and wisdom and relationships must be built – otherwise we are like the foolish man who built on the sand. Matt 7:24-27

1  Now faith is the assurance of things hoped for, the conviction of things not seen. Hebrews 11:1 (ESV)

Without the article, indicating that it is treated in its abstract conception, and not merely as Christian faith. It is important that the preliminary definition should be clearly understood, since the following examples illustrate it. The key is furnished by v. 27, as seeing him who is invisible. Faith apprehends as a real fact what is not revealed to the senses. It rests on that fact, acts upon it, and is upheld by it in the face of all that seems to contradict it. Faith is a real seeing.

in describing the nature of the Son as the image or impress of God’s essential being: but in this sense it is applied to faith, which is an act of the moral intelligence directed at an object; or a condition which sustains a certain relation to the object. It cannot be said that faith is substantial being. It apprehends reality: it is that to which the unseen objects of hope become real and substantial. Assurance gives the true idea. It is the firm grasp of faith on unseen fact.

Now faith is (estin de pistis). He has just said that “we are of faith” (Hebrews 10:39), not of apostasy. Now he proceeds in a chapter of great eloquence and passion to illustrate his point by a recital of the heroes of faith whose example should spur them to like loyalty now.

The assurance of things hoped for (elpizomenon hupostasis). Hupostasis is a very common word from Aristotle on and comes from huphistemi (hupo, under, histemi, intransitive), what stands under anything (a building, a contract, a promise). See the philosophical use of it in Hebrews 1:3, the sense of assurance (une assurance certaine, M‚n‚goz) in Hebrews 3:14, that steadiness of mind which holds one firm (2 Cor. 9:4). It is common in the papyri in business documents as the basis or guarantee of transactions. “And as this is the essential meaning in Hebrews 11:1 we venture to suggest the translation ‘Faith is the title-deed of things hoped for'” (Moulton and Milligan, Vocabulary, etc.).

conviction… adds to the simple idea of assurance a suggestion of influences operating to produce conviction which carry the force of demonstration. The word often signifies a process of proof or demonstration. So von Soden: “a being convinced. Therefore not a rash, feebly-grounded hypothesis, a dream of hope, the child of a wish.”

The proving of things not seen (pragmaton elegchos ou blepomenon). The only N.T. example of elegchos (except Textus Receptus in 2 Tim. 3:16 for elegmon). Old and common word from elegcho (Matthew 18:15) for “proof” and then for “conviction.” Both uses occur in the papyri and either makes sense here, perhaps “conviction” suiting better though not in the older Greek.  —Word Pictures in the New Testament

Faith is to believe what we do not see, and the reward of this faith is to see what we believe. – Augustine

3  He is the radiance of the glory of God and the exact imprint of his nature, and he upholds the universe by the word of his power. After making purification for sins, he sat down at the right hand of the Majesty on high, Hebrews 1:3 (ESV)

Rend the very image (or impress) of his substance The primary sense of ὑπόστασις substance is something which stands underneath; foundation, ground of hope or confidence, and so assurance itself. In a philosophical sense, substantial nature; the real nature of anything which underlies and supports its outward form and properties.  – Word Studies in the New Testament.

4  Otherwise, if some Macedonians come with me and find that you are not ready, we would be humiliated—to say nothing of you—for being so confident. 2 Corinthians 9:4 (ESV)

17  What I am saying with this boastful confidence, I say not as the Lord would but as a fool. 2 Corinthians 11:17 (ESV)

Now faith is the title deed of things hoped for, proof of things which are not being seen. For by means of this [namely, faith] the elders had witness borne them. By means of faith we perceive that the material universe and the God-appointed ages of time  were equipped and fitted by God’s word for the purpose  for which they were intended, and it follows therefore that which we see did not come into being out of which is visible. Hebrews 11:1-3 (Wuest’s Expanded Trans.)

to faith, which is an act of the moral intelligence directed at an object; or a condition which sustains a certain relation to the object. It cannot be said that faith is substantial being. It apprehends reality: it is that to which the unseen objects of hope become real and substantial. Assurance gives the true idea. It is the firm grasp of faith on unseen fact. –  Vincent’s

My Conviction That The Unseen Is Real.

to the simple idea of assurance a suggestion of influences operating to produce conviction which carry the force of demonstration. The word often signifies a process of proof or demonstration. So von Soden: “a being convinced. – Vincent’s

Faith is to believe what we do not see, and the reward of this faith is to see what we believe. –Augustine

Faith is also a way of viewing all experience since it is the way in which believers see the universe (tous aionas, lit., “the ages,” also rendered “the universe” in 1:2) for what it is—a creation by God. – Bible Background Commentary

God bore witness to them in the victory of their faith over all obstacles, and their characters and deeds as men of faith were recorded in Scripture.—Vincent’s Word Studies in the New Testament

3) Faith Means I understand that…

Antony Flew, a legendary British philosopher and atheist, has changed his mind about the existence of God in light of recent scientific evidence.

Flew — a prolific author has argued against the existence of God and the claims of Christianity for more than 50 years.

Flew said he is now best described as a deist — a person who believes God created the universe but is not actively involved in people’s lives today.

“I don’t believe in the God of any revelatory system, although I am open to that,” Flew. But it seems to me that the case for … [a] God who has the characteristics of power and also intelligence is now much stronger than it ever was before.”

Flew credits his newfound belief in God to arguments from design such as those espoused by the “intelligent design” (ID) movement. “I think that the most impressive arguments for God’s existence are those that are supported by recent scientific discoveries,” Flew said. “… I think the argument to Intelligent Design is enormously stronger than it was when I first met it.”

Although many atheists appeal to naturalistic evolution as a method by which the world could have come into existence apart from God, Charles Darwin himself acknowledged that the process of evolution requires a creator to start the process, Flew said.

“Darwin himself, in the fourteenth chapter of The Origin of Species, pointed out that his whole argument began with a being which already possessed reproductive powers,” Flew said. “This is the creature the evolution of which a truly comprehensive theory of evolution must give some account. Darwin himself was well aware that he had not produced such an account.”

While Flew said he does not believe in a God who is active in the lives of humans, he is “open to” the possibility of divine revelation. He also believes that Christians are intellectually justified in holding to their religion and that the resurrection of Jesus has more evidential support than any other reported miracle in history.

“The evidence for the resurrection is better than that for claimed miracles in any other religion,” Flew said. “It’s outstandingly different in quality and quantity, I think, from the evidence offered for the occurrence of most other supposedly miraculous events.”

Despite his belief in the existence of God, Flew said it is unlikely that he will ever become a Christian. The major evidence against the God of Christianity is the problem of evil, Flew said.

“The problem of evil is a problem … for Christians,” Flew said. “The thesis that the universe was created and is sustained by a Being of infinite power and goodness is flatly incompatible with the occurrence of massive undeniable and undenied evils in that universe.”

Flew also argues that God does not have “any preferences … about or any intentions concerning human behavior or about the eternal destinies of human beings.”

WHERE DOES FAITH COME FROM?

Does God give it to us as a gift, are we unable to believe without this gift?

Or is belief in Christ a choice, aided by the Holy Spirit’s ministry but never-the-less my choice?

Some use this passage to teach faith comes from God.

4  But God, being rich in mercy, because of the great love with which he loved us, 5  even when we were dead in our trespasses, made us alive together with Christ—by grace you have been saved— 6  and raised us up with him and seated us with him in the heavenly places in Christ Jesus, 7  so that in the coming ages he might show the immeasurable riches of his grace in kindness toward us in Christ Jesus. 8  For by grace you have been saved through faith. And this is not your own doing; it is the gift of God, 9  not a result of works, so that no one may boast. Ephesians 2:4-9 (ESV)

And that (kai touto). Neuter, not feminine tautē, and so refers not to pistis (feminine) or to charis (feminine also), but to the act of being saved by grace conditioned on faith on our part. Paul shows that salvation does not have its source (ex humōn, out of you) in men, but from God. Besides, it is God’s gift (dōron) and not the result of our work – Word Pictures in the New Testament.

Not faith, but the salvation.  – Word Studies in the New Testament.

You CAN’T have it both ways, it must refer to one or the other.

How could God command people to believe if they are unable to do it?