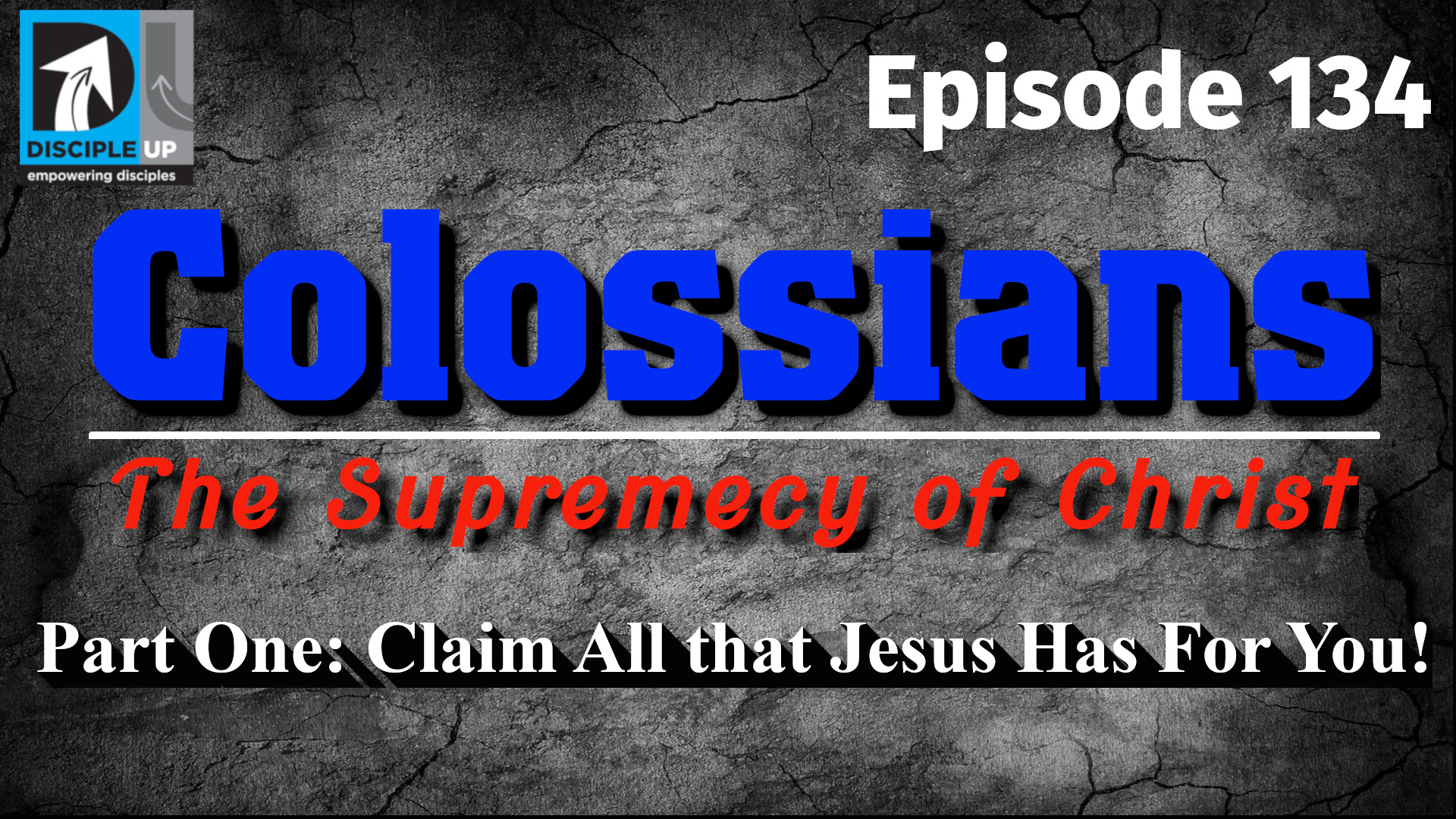 Disciple Up #134 Show Notes
Colossians: The Supremacy of Christ
Introduction: Examine Our Relationship to the Truth
By Louie Marsh, 11-13-2019

Colossae. Colossae was in Phrygia, where religion was practiced with intensity and sometimes frenzy (e.g., the famous mother-goddess cult of Cybele). There is evidence for a Jewish presence in Phrygia as early as the sixth century b.c.; this Phrygian Judaism seems to have mirrored its culture to a significant extent. Christianity likewise exhibited unorthodox tendencies in this region in subsequent centuries. Colossae was a small and socially unimportant city by this period; it is probably only one of many cities in which Paul’s students had founded churches (Acts 19:10). The city was severely damaged or destroyed by an earthquake in a.d. 61, hence many scholars think that Paul wrote before that date.

Situation. Col. 2 may indicate that Christians were attracted to mystical or apocalyptic elements in a Judaism thoroughly influenced by Phrygian culture. (A great number of backgrounds have been proposed for the error at Colossae: mystery cults, broader Hellenistic mysticism, Hellenistic Judaism, Qumran-type Judaism and so on. The merit of considering these sources is that they all reflect some broader cultural ideas that played into the problems Paul confronted in Colossae; even Qumran parallels, while limited to Palestine, provide evidence for some more widespread Jewish beliefs in this period. The one suggestion with little merit to sustain it is Gnosticism, since full Gnostic systems cannot be dated this early. But that the Colossian error reflects one synthesis of different streams of thought that later developed toward Gnosticism is quite possible.)

That some Jewish Sibylline oracles may issue from that region and the activity of later Christian Montanists there both suggest the possibility of ecstatic elements in local Judaism (Col. 2:18). Acts testifies that Paul was preaching Christ to philosophically minded audiences in this period (see comment on Acts 19:9), and letters like Ephesians and Colossians give us an indication of Paul’s grasp of Greek philosophy and also some of the popular philosophical ideas that permeated both Gentile and Jewish thought in mid-first-century Asia Minor. – Bible Background Commentary – The IVP Bible Background Commentary – New Testament.

Colossians was written from Rome during Paul’s (first) imprisonment there, as recorded in Acts 28:30. At the same time Paul wrote Ephesians and Philemon (ca. a.d. 60-62). In Philemon 1, 9 Paul referred to himself as “a prisoner of Christ Jesus.” Ephesians also contains references to Paul being a “prisoner” (Eph. 3:1; 4:1). And Ephesians refers to Tychicus carrying the epistles from Paul to their destinations (Eph. 6:21; cf. Col. 4:7). Since the record of Acts ends around a.d. 60-62, Colossians was probably written during this two-year imprisonment. And since neither Colossians, Ephesians, nor Philemon mention the outcome of Paul’s trial, anticipated in Philippians 1:19-21, it can be assumed that Colossians was written before Philippians.

Colosse was in the Lycus Valley, about 100 miles east of Ephesus in Asia Minor. Its name is possibly derived from Colossus, a large statue, which in turn may have been named for the unusual shape of stony deposits there. Colosse is about 12 miles from Hierapolis and Laodicea, the other two cities of that valley (see the location of these three on the map between Acts and Rom.). The area was rich in mineral deposits and was also subject to frequent earthquakes. Rich pasturelands were nearby. Several references in Colossians indicate that Paul had not visited the city (Col. 1:7; 2:1; 4:12).

Three purposes seem to have been in Paul’s mind as he wrote Colossians. First, he sought to show the deity and supremacy of Christ in the face of the Colossian heresy (1:18; 2:9). Second, he wanted to lead believers into spiritual maturity (1:28; 2:6-7). Third, he wanted to inform them about his state of affairs and elicited their prayers on his behalf (4:2-8).

The Bible Knowledge Commentary: An Exposition of the Scriptures by Dallas Seminary Faculty.

All 1,871 self-described Christians were asked about their perception of God. In total, three-quarters (78%) said he is the “all-powerful, all-knowing Creator of the universe who rules the world today.” The remaining one-quarter chose other descriptions of God – depictions that are not consistent with biblical teaching (e.g., everyone is god, god refers to the realization of human potential, etc.).

For the other survey items a four-point opinion scale was used to measure people’s reactions to statements about each spiritual entity.

Four out of ten Christians (40%) strongly agreed that Satan “is not a living being but is a symbol of evil.” An additional two out of ten Christians (19%) said they “agree somewhat” with that perspective. A minority of Christians indicated that they believe Satan is real by disagreeing with the statement: one-quarter (26%) disagreed strongly and about one-tenth (9%) disagreed somewhat. The remaining 8% were not sure what they believe about the existence of Satan.

Although a core teaching of the Christian faith is the divinity and perfection of Jesus Christ, tens of millions of Christians do not accept that teaching. More than one-fifth (22%) strongly agreed that Jesus Christ sinned when He lived on earth, with an additional 17% agreeing somewhat. Holding the opposing view were 9% who disagreed somewhat and 46% who disagreed strongly. Six percent did not have an opinion on this matter.

Most self-described Christians contend that their religious faith has significantly impacted their life. Almost six out of ten adults (59%) said their faith had “greatly transformed” their life, while 29% said their faith “has been helpful but has not greatly transformed” their life and 9% stated that their religious faith “has not made much of a difference” in who they are and how they live.

Christians were asked if they believed that a person must either side with God or with the devil – that there is no in-between position. A large majority strongly agreed with the notion (61%) while an additional 15% agreed somewhat. Just one out of ten adults disagreed somewhat (10%) and a similar proportion (11%) disagreed strongly. Surprisingly few adults (3%) did not have an opinion on this matter.

Thoughts on Other Faiths

Survey respondents were asked whether they believed that Mormons are Christians. Mormons themselves claim to be Christian, but most evangelical leaders say that they are not. There was no clear-cut perspective among the self-described Christians: four out of ten felt Mormons were Christian (18% strongly agreed, 21% somewhat agreed), three out of ten disagreed (17% strongly, 12% somewhat), and three out of ten were not sure what to think.

Views on the Bible

A slight majority of Christians (55%) strongly agree that the Bible is accurate in all of the principles it teaches, with another 18% agreeing somewhat. About one out of five either disagree strongly (9%) or somewhat (13%) with this statement, and 5% aren’t sure what to believe.

When faced with the statement that “the Bible, the Koran and the Book of Mormon are all different expressions of the same spiritual truths,” the group was evenly split between those who accepted the idea (19% agreed strongly, 22% agreed somewhat) and those who rejected it (28% disagreed strongly, 12% disagreed somewhat), while leaving a sizeable portion (20%) undecided.

If you’re going to live right in a warped world – then you have to start with the truth – at Jesus’ trial Pilate asked Christ, “What is truth?”  A very modern question – and one that must be answered if we are get though life the way we ought too.