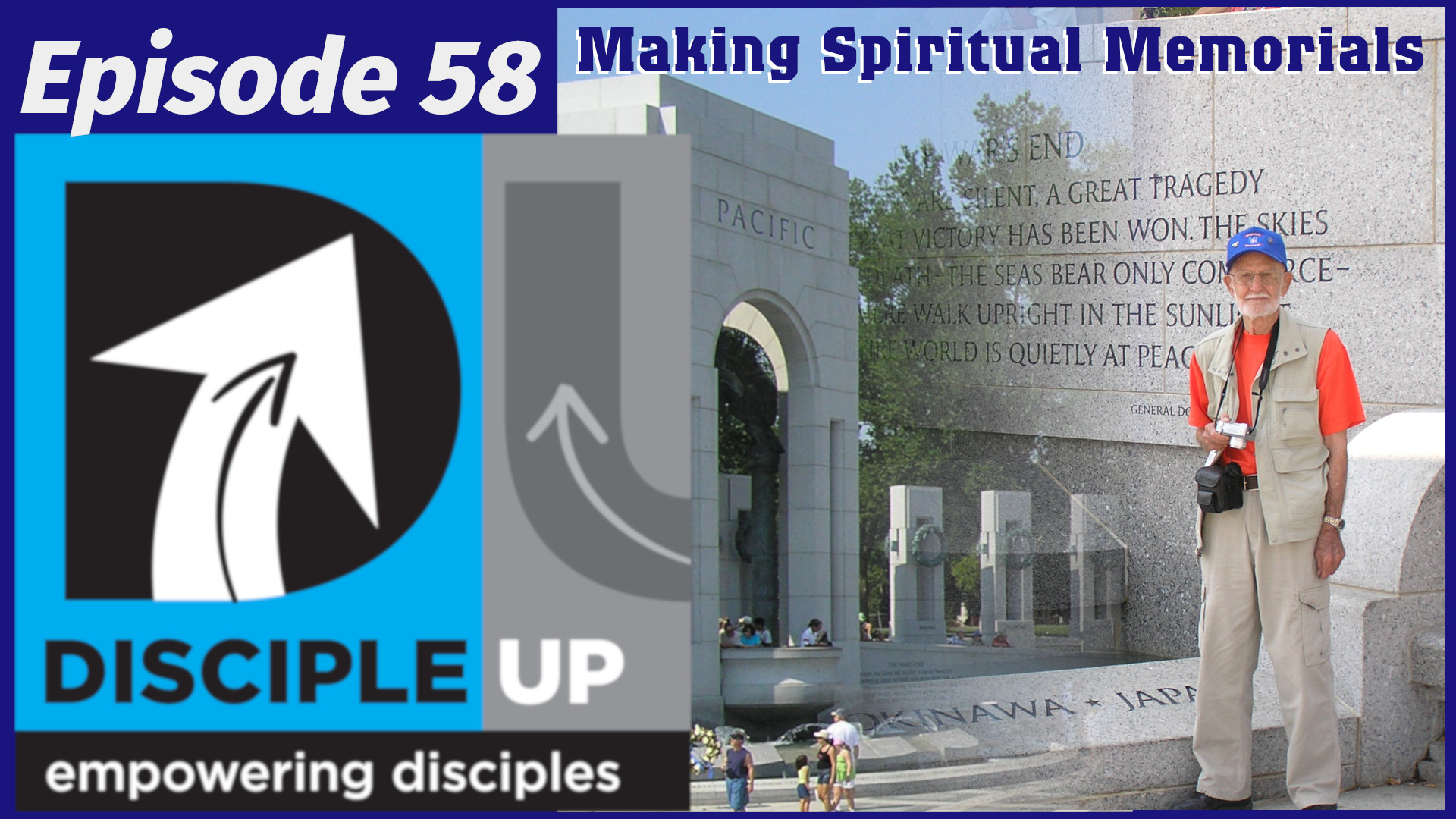 1 : serving to preserve remembrance : commemorative. 2 : of or relating to memory.

Memorial Day is an American holiday, observed on the last Monday of May, honoring the men and women who died while serving in the U.S. military. Memorial Day 2018 occurs on Monday, May 28. Originally known as Decoration Day, it originated in the years following the Civil War and became an official federal holiday in 1971. Many Americans observe Memorial Day by visiting cemeteries or memorials, holding family gatherings and participating in parades. Unofficially, it marks the beginning of the summer season.

People have always done this – look at all the monuments in history. See how they often end up commemorating something different than the designers wanted them too – ie. The pyramids.

We all need memorials and days in our lives to reflect upon, learn from and preserve our own spiritual growth.

This was done a lot in the Bible:

1 At Caesarea there was a man named Cornelius, a centurion of what was known as the Italian Cohort, 2 a devout man who feared God with all his household, gave alms generously to the people, and prayed continually to God. 3 About the ninth hour of the day he saw clearly in a vision an angel of God come in and say to him, “Cornelius.” 4 And he stared at him in terror and said, “What is it, Lord?” And he said to him, “Your prayers and your alms have ascended as a memorial before God. 5 And now send men to Joppa and bring one Simon who is called Peter. 6 He is lodging with one Simon, a tanner, whose house is by the sea.” 7 When the angel who spoke to him had departed, he called two of his servants and a devout soldier from among those who attended him, Acts 10:1-7 (ESV)

Here is also to be noted, that the cause of the institution was to be a memorial, to testify that Christ’s body was given, and his blood shed for us. – William Tyndale

For famous men have the whole earth as their memorial. – Pericles

Since it is not granted to us to live long, let us transmit to posterity some memorial that we have at least lived. E. Joseph Cossman

Letters are among the most significant memorial a person can leave behind them. Johann Wolfgang von Goethe

The Disciple Up Low Down On Making Memorials

This is the Disciple Up Low Down on the Making of Memorials.

If you’ve ever been to Washington DC then you’ve probably seen at least some of the memorials there. I’ve been blessed enough to have gone several times and have seen most of them. The two that struck me most forcefully were the Lincoln Memorial and the World War Two Memorial. Of course having the pleasure to visit the World War Two Memorial with my father who was a veteran of that war made that first occasion special indeed.

That town is full of memorials as are many cities and towns across the world. I’ve seen memorials in the islands of the Pacific (indeed I had the privilege of helping to dedicate one to the members of the 2nd Raiders who were beheaded on Kwajalein years ago) in South East Asia, Spain and across the United States. I know there are thousands of others as well.

Mankind has a drive to create these things because we don’t want what we have done, or what our loved ones have done, to be forgotten. We hate the idea of that sacrifice and service passing unknown into history even as we know that the vast majority of all such service and sacrifice will be forgotten in a mere generation or two.

This offends both our pride and our love so we build and teach and write books and make movies all designed to make memories. But in the end we know that most, if not all, of what we memorialize will be forgotten in the mists of time.

But such is the human spirit that despite knowing this we still strive. There is good and bad in this of course.

The good is that we don’t give up and that we do seek to remember honorable service. This is as it should be. The Bible reminds us to honor those who serve. Listen to how Paul the Apostle speaks of two men who are all but forgotten: 17 I rejoice at the coming of Stephanas and Fortunatus and Achaicus, because they have made up for your absence, 18 for they refreshed my spirit as well as yours. Give recognition to such people. 1 Corinthians 16:17-18 (ESV)

The downside to all this is our egos naturally. Look at the massive pyramids which are nothing but monuments to a Pharaoh’s massive ego. Many of them still stand today, but who can name the Pharaoh’s who so proudly built them? Not many.

Yes, glory is fleeting and our lives are like the flowers, here today and gone tomorrow. But while we live it is good to remember and honor those who serve or have served. It is even better to honor those who serve or have served the Kingdom of God. And it is best to remember, honor and serve the King of Kings and the Lord of Lords, our Savior Jesus, who alone is worthy of all honor and praise.

And that’s the Disciple Up Low Down on the Making of Memorials.

How To Make A Spiritual Memorial

• Do it Publicly (accountable) 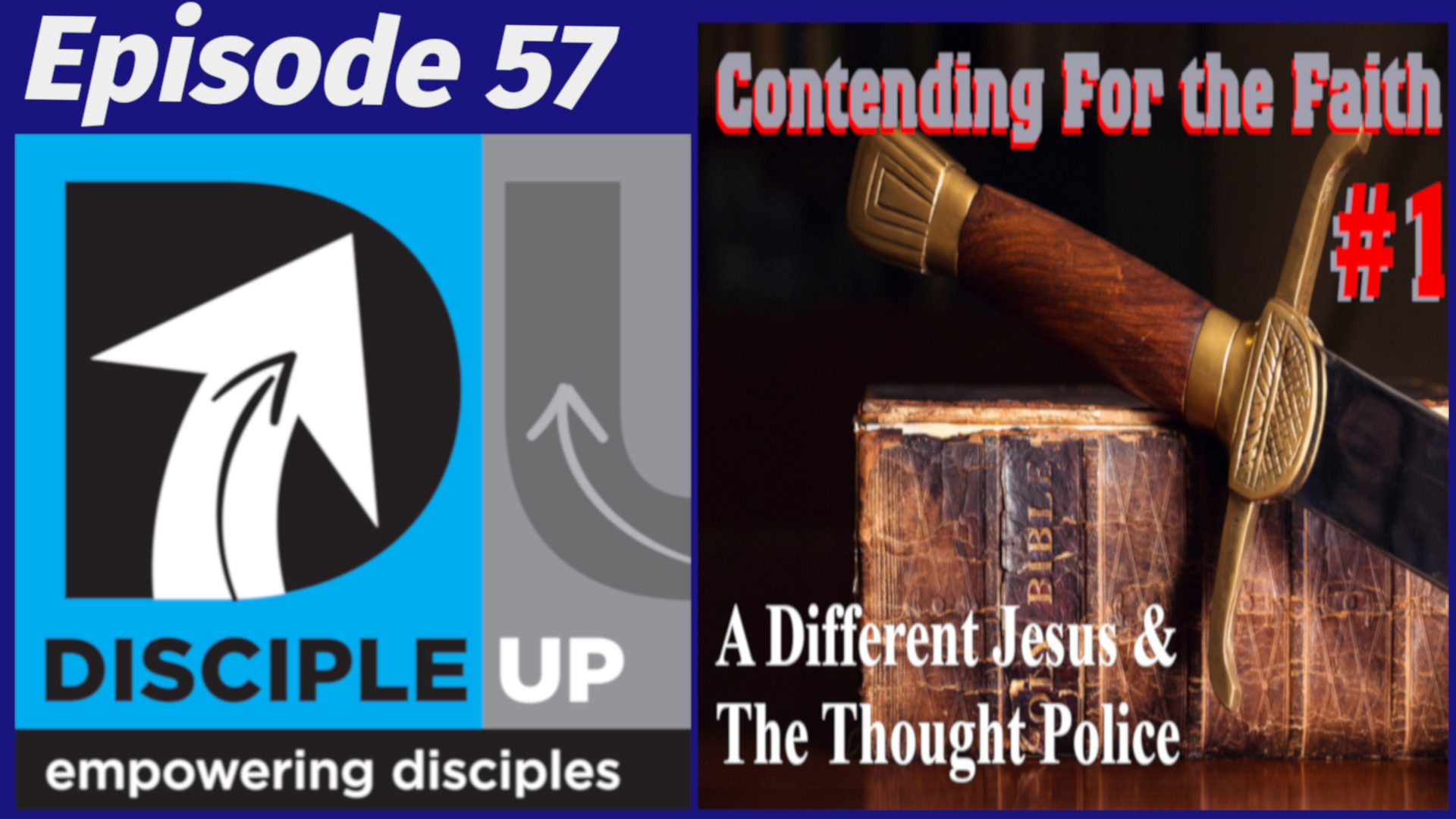 What Contending for Faith Episodes will be:

3  Beloved, although I was very eager to write to you about our common salvation, I found it necessary to write appealing to you to contend for the faith that was once for all delivered to the saints. 4  For certain people have crept in unnoticed who long ago were designated for this condemnation, ungodly people, who pervert the grace of our God into sensuality and deny our only Master and Lord, Jesus Christ. Jude 1:3-4 (ESV)

6  I am astonished that you are so quickly deserting him who called you in the grace of Christ and are turning to a different gospel— 7  not that there is another one, but there are some who trouble you and want to distort the gospel of Christ. 8  But even if we or an angel from heaven should preach to you a gospel contrary to the one we preached to you, let him be accursed. 9  As we have said before, so now I say again: If anyone is preaching to you a gospel contrary to the one you received, let him be accursed. 10  For am I now seeking the approval of man, or of God? Or am I trying to please man? If I were still trying to please man, I would not be a servant of Christ. Galatians 1:6-10 (ESV)

These episodes aren’t just teaching Scripture but looking at what the world around us is saying on a variety of topics and issues and then applying Scripture to that. 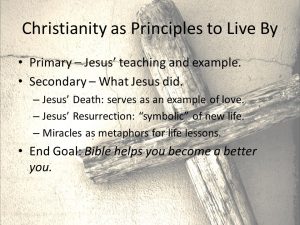 This appears to be one slide from a sermon which is actually supporting the validity of Scripture and the identity of Jesus. So apparently this slide is a summation of the wrong approach to Jesus.

Nevertheless it deserves to be looked at closely.

3  But I am afraid that as the serpent deceived Eve by his cunning, your thoughts will be led astray from a sincere and pure devotion to Christ. 4  For if someone comes and proclaims another Jesus than the one we proclaimed, or if you receive a different spirit from the one you received, or if you accept a different gospel from the one you accepted, you put up with it readily enough. 2 Corinthians 11:3-4 (ESV)

Do You Have A Right To Believe Whatever You Want Too?

By Daniel DeNicola is professor and chair of philosophy at Gettysburg College in Pennsylvania and the author of Understanding Ignorance: The Surprising Impact of What We Don’t Know (2017), which received the 2018 PROSE Award in Philosophy from the Association of American Publishers. 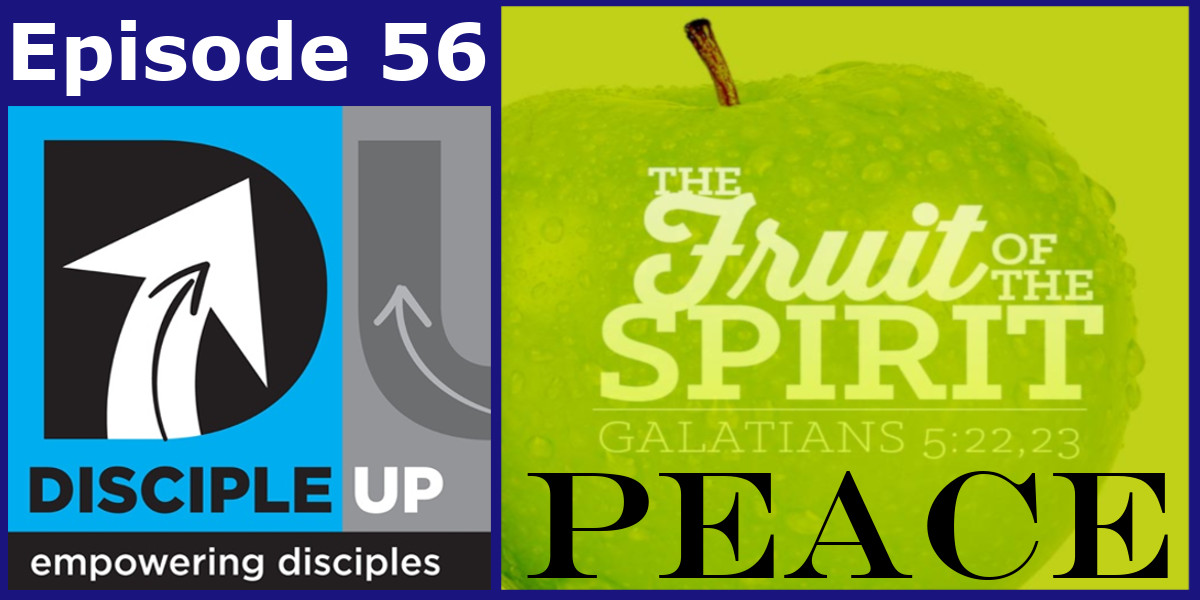 Where We’ve Been So Far…

1) Peace is not just absence of conflict, it’s about WHOLENESS.

23  Now may the God of peace himself sanctify you completely, and may your whole spirit and soul and body be kept blameless at the coming of our Lord Jesus Christ. 1 Thessalonians 5:23 (ESV)

The New Testament Greek word most often translated as “peace” is eirene. It has the sense of “joining what had previously been separated or disturbed.” Thus, it frequently is used to signify “setting at one; quietness; and rest.” The familiar greeting, shalom. Though it is also generally translated as a single word like peace, rest, favor, safe, health, welfare and prosperity, it has, as the International Standard Bible Encyclopedia states, “a basic meaning of totality or completeness including fulfillment, maturity, soundness, and wholeness.”

27  Peace I leave with you; my peace I give to you. Not as the world gives do I give to you. Let not your hearts be troubled, neither let them be afraid. John 14:27 (ESV)

7  And the peace of God, which surpasses all understanding, will guard your hearts and your minds in Christ Jesus. Philippians 4:7 (ESV)

Share your smile with the world. It’s a symbol of friendship and peace. Christie Brinkley

Peace is not absence of conflict, it is the ability to handle conflict by peaceful means. Ronald Reagan

To be prepared for war is one of the most effective means of preserving peace. George Washington

“Nothing external to you has any power over you.”  ― Ralph Waldo Emerson

“We can never obtain peace in the outer world until we make peace with ourselves.” ― Dalai Lama XIV

2) As a follower of Jesus I ALREADY HAVE the peace of God.

1  Therefore, since we have been justified by faith, we have peace with God through our Lord Jesus Christ. Romans 5:1 (ESV)

Being forgiven by Jesus I STAND on this objective truth.

3  Beloved, although I was very eager to write to you about our common salvation, I found it necessary to write appealing to you to contend for the faith that was once for all delivered to the saints. Jude 1:3 (ESV)

3) What should I do if I don’t FEEL FORGIVEN?

5  For which is easier, to say, ‘Your sins are forgiven,’ or to say, ‘Rise and walk’? 6  But that you may know that the Son of Man has authority on earth to forgive sins”—he then said to the paralytic—“Rise, pick up your bed and go home.” Matthew 9:5-6 (ESV)

16  For I am not ashamed of the gospel, for it is the power of God for salvation to everyone who believes, to the Jew first and also to the Greek. 17  For in it the righteousness of God is revealed from faith for faith, as it is written, “The righteous shall live by faith.” Romans 1:16-17 (ESV)

16  But when one turns to the Lord, the veil is removed. 17  Now the Lord is the Spirit, and where the Spirit of the Lord is, there is freedom. 18  And we all, with unveiled face, beholding the glory of the Lord, are being transformed into the same image from one degree of glory to another. For this comes from the Lord who is the Spirit. 2 Corinthians 3:16-18 (ESV)

4  Or do you presume on the riches of his kindness and forbearance and patience, not knowing that God’s kindness is meant to lead you to repentance? Romans 2:4 (ESV) 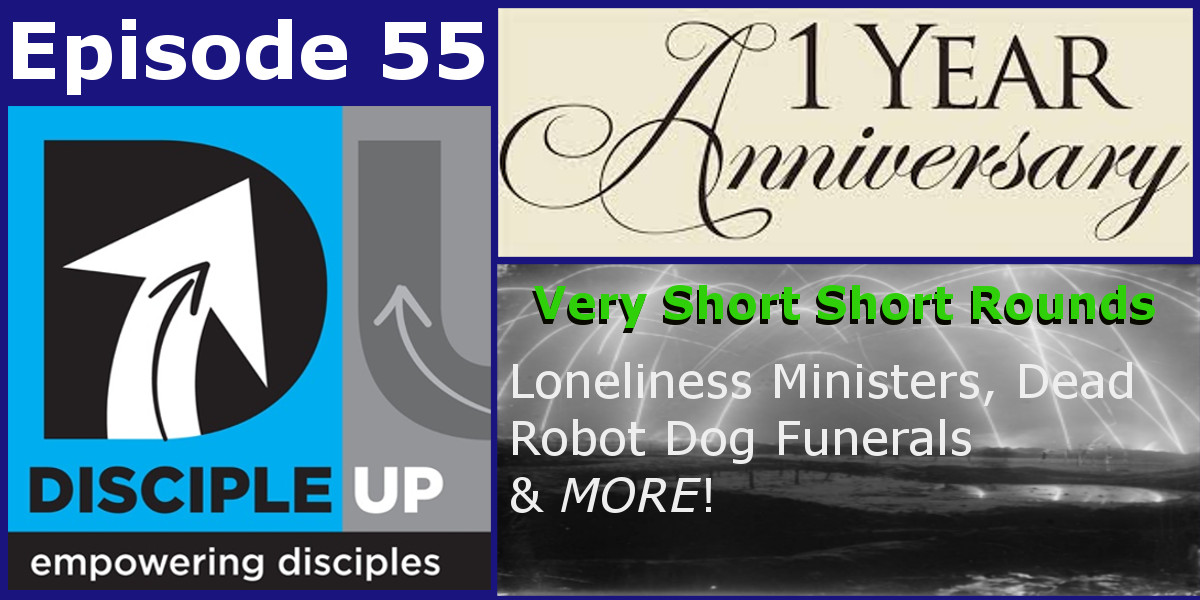 Intro – Happy Birthday Disciple Up – A few thoughts on this less than momentous occasion.

A little blast from the past, the very first Disciple Up Low Down – The Christian Ghetto

Perhaps my favorite Disciple Up – Accountability

Disciple Up on Self-Condemnation

The heart is deceitful above all things, and desperately sick; who can understand it? – Jer. 17:9 ESV 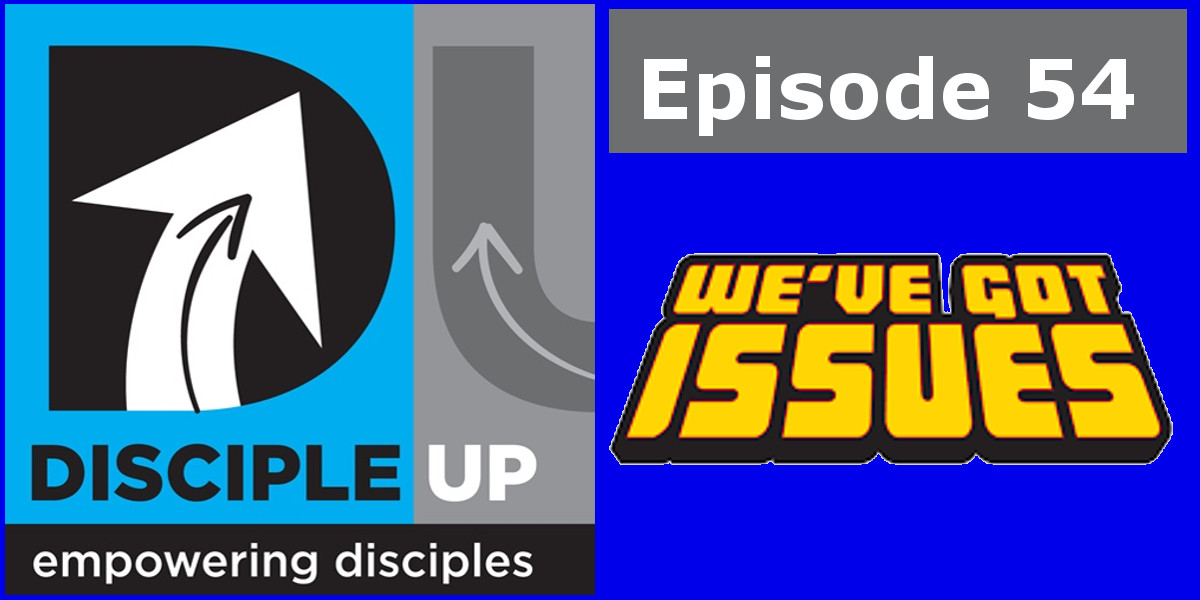