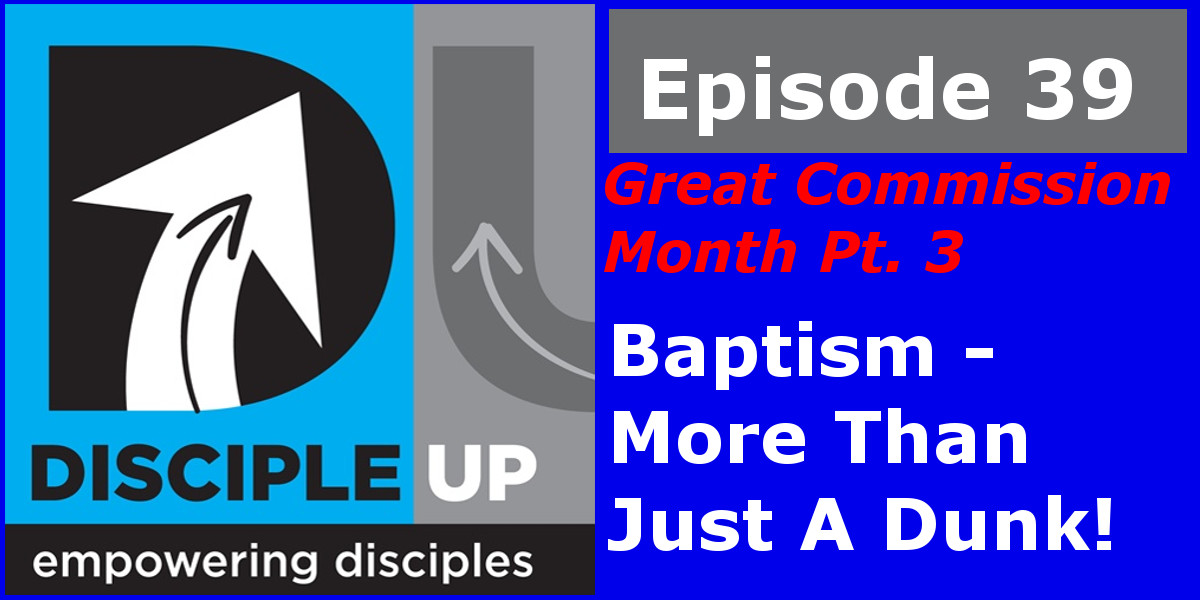 So let’s look at what it is, what it’s important and why this symbol is critical to our discipleship and our following of Jesus.

The starting point for any discussion of baptism ought to be what the word is and means. Right here we discover the first reason people are confused about it – it’s a Greek word!  That’s right, baptism isn’t English at all! It’s a transliteration of the Greek word baptizo.

Baptism is the normal Greek word for immerse, dip or plunge. They had other words for sprinkle or pour, just as we do in English. It was used of ships sinking, of dipping a cloth into dye to change the color, etc.

All the great church leaders of the past clearly stated this was so – even when their own church traditions and practices didn’t conform to the Biblical command!

Martin Luther (founder of the Lutheran Church and the one who began the whole Protestant Reformation) said, “I would have those who are to be baptized to be entirely immersed, as the word imports and the mystery signifies.”

John Calvin (a younger contemporary of Luther, the Presbyterian and other churches look to him as a founder) said, “The word “baptize” signifies to immerse. It is certain that immersion was the practice of the ancient church.”

John Wesley (founder of the Methodist Church) said, “Buried with Him, alludes to baptizing by immersion according to the custom of the first church.”

So while the meaning of the word is clear, is there any support for this in Scripture? The answer is yes, there are several passages that make it clear that baptism is immersion.

What shall we say, then? Shall we go on sinning so that grace may increase? By no means! We died to sin; how can we live in it any longer? Or don’t you know that all of us who were baptized into Christ Jesus were baptized into his death? We were therefore buried with him through baptism into death in order that, just as Christ was raised from the dead through the glory of the Father, we too may live a new life. If we have been united with him like this in his death, we will certainly also be united with him in his resurrection. Romans 6:1-5 (NIV)

In the book of Acts there’s a great story of Phillip being sent by the Lord to share the Good News with the Ethiopian eunuch. After he presents the Gospel from an Old Testament passage, look what happens.

As they traveled along the road, they came to some water and the eunuch said, “Look, here is water. Why shouldn’t I be baptized?” And he gave orders to stop the chariot. Then both Philip and the eunuch went down into the water and Philip baptized him. When they came up out of the water, the Spirit of the Lord suddenly took Philip away, and the eunuch did not see him again, but went on his way rejoicing. Acts 8:36-39 (NIV)

If baptism can be done by pouring or sprinkling why did they have to wait till they found a body of water and then go down into it? Why not use stop and use some water from a water bag they surely had on hand?

The evidence is clear and overwhelming, baptism is to be done by immersion!

Who Should Be Baptized?

Jesus made this about as clear as it’s possible to make anything at the end of His Ministry in the Gospel of Matthew.

Therefore go and make disciples of all nations, baptizing them in the name of the Father and of the Son and of the Holy Spirit, and teaching them to obey everything I have commanded you. And surely I am with you always, to the very end of the age.” Matthew 28:19-20 (NIV)

Jesus expected all those who put their faith in Him as their Leader and Forgiver (Lord and Savior) to be baptized as part of becoming His disciple. This is clear as crystal from this command. Remember this is a command, not a suggestion! Baptism isn’t optional because it’s part of Christ’s very commands to His Apostles before they launched out on their mission to bring salvation to the ends of the earth!

If that’s true, you would expect to see the early church in the book of Acts follow this pattern. And that’s exactly what they did. When you study the Bible you find that the normal patter for people coming to Christ involved hearing the Gospel, believing it, turning away from their sin (repenting) confessing their faith in Christ to others, being baptized into Christ. Often they are then called saved.

Look at the chart below to see how often these important factors are mentioned in the book of Acts as Luke, guided and inspired by the Holy Spirit, recorded the major or historically noteworthy conversions in the early history of the church.

Interesting isn’t it? The only things that are mentioned in every conversion occurrence is  belief and baptism! That’s probably the exact opposite of what most of us would expect, yet that’s precisely what we find in God’s Word.

Baptism is not only a sacrament of our union with Christ; it is also a sacrament of our communion as the body of Christ. – Michael Horton
In baptism, new Christians become part of a body of fellow believers who are called to spiritually encourage one another and hold one another responsible for consistent Christian living. – Tony Campolo

All of us who desire the kingdom of God are, by the Lord’s decree, under an equal and rigorous necessity of seeking after the grace of Baptism. – Saint Basil

Vaccination is the medical sacrament corresponding to baptism. Whether it is or is not more efficacious I do not know. – Samuel Butler

When Paul was exhorted to be baptized and to wash away his sins, there was an evident allusion to the use of water in the ordinance of baptism, and had there been no application of water on which to ground such an allusion, we may be certain that we should never have heard of washing away sins in baptism. – Adoniram Judson

The important place that baptism holds in the life of the Christian is not only hinted at by how often it’s mentioned in the book of Acts, it’s spelled out by the Apostle Paul for us in a way that is often over looked because it’s tied into the Jewish heritage our Christian faith rests on.

See to it that no one takes you captive through hollow and deceptive philosophy, which depends on human tradition and the basic principles of this world rather than on Christ. For in Christ all the fullness of the Deity lives in bodily form, and you have been given fullness in Christ, who is the head over every power and authority. In him you were also circumcised, in the putting off of the sinful nature, not with a circumcision done by the hands of men but with the circumcision done by Christ, having been buried with him in baptism and raised with him through your faith in the power of God, who raised him from the dead. Colossians 2:8-12 (NIV)

Notice here again Paul uses the imagery of burial in connection with baptism. He also ties baptism into the ancient Jewish rite of circumcision, thus confusing a lot of Christians who don’t really understand what circumcision was in the Old Testament.

God established circumcision as the sign of His covenant with Israel before the Law of Moses. He gave it Abraham as a sign and as something that absolutely must be done if a man wanted to be part of God’s Community.

You are to undergo circumcision, and it will be the sign of the covenant between me and you. For the generations to come every male among you who is eight days old must be circumcised, including those born in your household or bought with money from a foreigner–those who are not your offspring. Whether born in your household or bought with your money, they must be circumcised. My covenant in your flesh is to be an everlasting covenant. Any uncircumcised male, who has not been circumcised in the flesh, will be cut off from his people; he has broken my covenant.” Genesis 17:11-14 (NIV)

Baptism is different from circumcision in a crucial way, a difference that illustrates and celebrates what a wonderful covenant that all people have with Christ. Baptism is for everyone – both men and women!

You are all sons of God through faith in Christ Jesus, for all of you who were baptized into Christ have clothed yourselves with Christ. There is neither Jew nor Greek, slave nor free, male nor female, for you are all one in Christ Jesus. If you belong to Christ, then you are Abraham’s seed, and heirs according to the promise. Galatians 3:26-29 (NIV)

Salvation in Christ is offered to all, whether you are Jew, Gentile, woman, or man. It makes no difference because the Gospel is the power of God for the salvation of all! In Christ men and women have equal status before God as His redeemed children, with full access to his throne!

1  For I do not want you to be unaware, brothers, that our fathers were all under the cloud, and all passed through the sea, 2  and all were baptized into Moses in the cloud and in the sea, 1 Corinthians 10:1-2 (ESV)

I like to think of Baptism in a metaphorical sense and a symbol for real and total commitment as well as being tightly focused on God. You can think of it as being immersed in the things of the Lord.