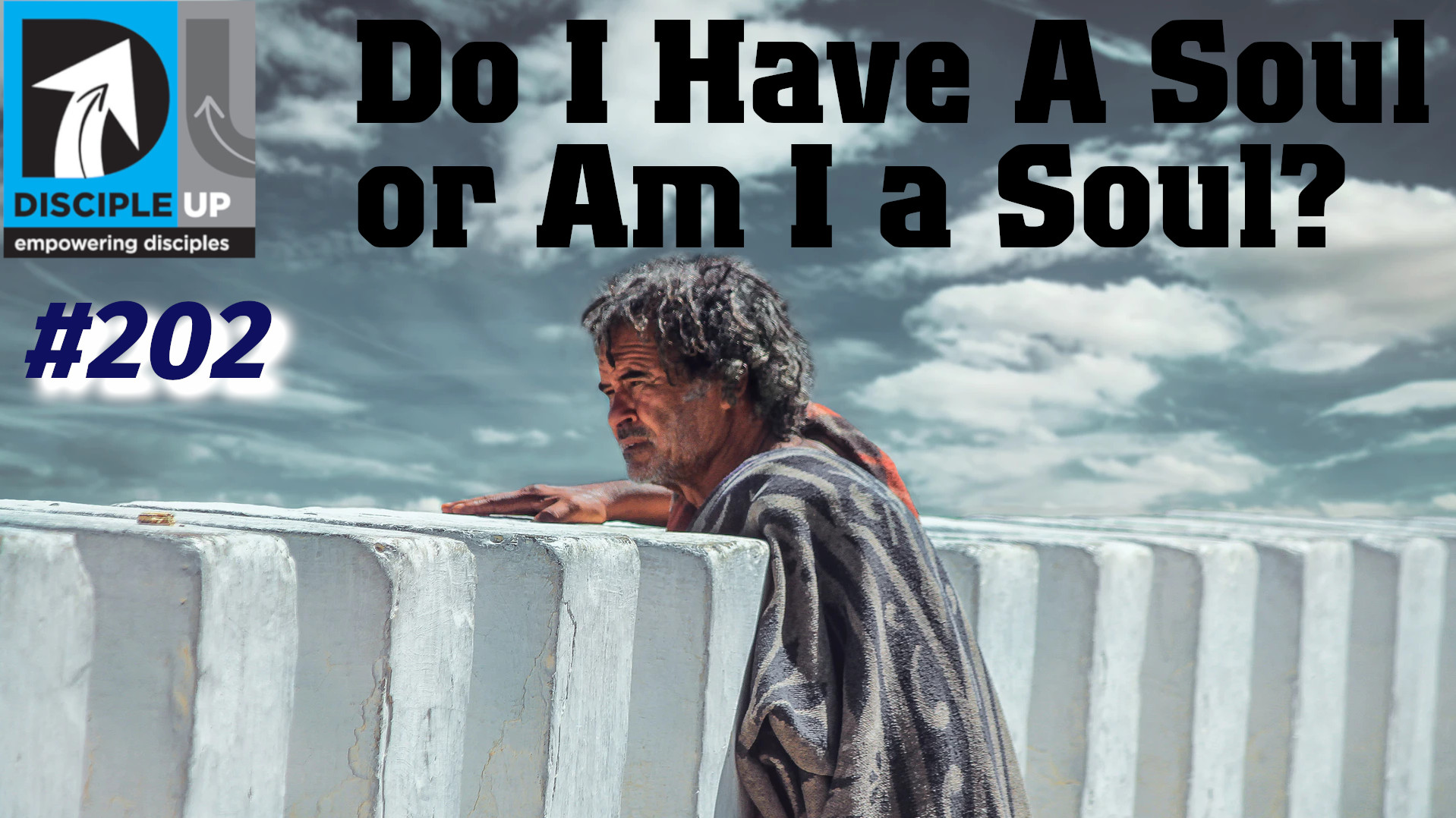 This episode sparked by an e-mail from a listener named John, who wrote:

Please check out my biggest and best book – Everyday in the Spirit – https://tinyurl.com/3fct42zn

I was listening to a podcast called “The Bible Project” and the guys on there bring up a point about the word in Hebrew that is translated into English as “soul” doesn’t really mean what we think. They say we are translating it wrong and that we don’t have a soul if you translate the word correctly it means the throat. The gateway to your innermost part of your body. I am confused about what that means as far as if I go to heaven or not when I die or what

Great question and indicative of a lot of what some people are saying these days about the soul and after life. So on this episode we’re going to dive in and check out what some scholars say about this and how in the end the Bible Project guys and I agree, but we disagree with how to get there.

Link are in the show notes to what I’ll be referencing as well as a link to the Bible Project so you can listen and decide for yourself.

You Are A SoulThis is our first episode related to our new word studies video on the Hebrew word “Nephesh” which often gets translated as “soul” in English bibles. In Hebrew the most basic meaning of the word is “throat.” Which seems weird to us. So how did we get “soul” from “throat”? Tim and Jon discuss.

In the first part of the episode (0-12:30), Tim and Jon outline where the word “soul” comes from (Old English), and why most people think that a core teaching of the Bible is people “having souls.” Jon asks how much you can really separate the ideas of a person’s “mind, soul, and body.”

In the second part of the episode (12:30-41:20), Tim explains that the Hebrew word “Nephesh” is an extremely common word in the Hebrew Old Testament. It occurs over 700 times, but less than 10% of the time is it translated as “soul.” It also gets translated as “life”, “heart”, “you”, “people” and several other words.

Tim outlines some famous verses in the Old Testament that use the word soul. Like Psalm 42 “ As the deer pants…My soul thirsts for you” the original meaning is Hebrew is “my throat thirsts for you.”

In the third part of the episode (41:20-end), Tim says “Nephesh” isn’t just used to describe humans, but also used to describe animals and what the land produced in Genesis. “And God said ‘Let the waters teem with living Nephesh.’”

Thank you to all our supporters! Check out more free resources on our website: www.thebibleproject.com

Usage Notes: “soul; self; life; person; heart.” This is a very common term in both ancient and modern Semitic languages. It occurs over 780 times in the Old Testament and is evenly distributed in all periods of the text with a particularly high frequency in poetic passages.

The basic meaning is apparently related to the rare verbal form, nāpash. The noun refers to the essence of life, the act of breathing, taking breath. However, from that concrete concept, a number of more abstract meanings were developed. In its primary sense the noun appears in its first occurrence in Gen. 1:20: “the moving creature that hath life,” and in its second occurrence in Gen. 2:7: “living soul.”

However, in over 400 later occurrences it is translated “soul.” While this serves to make sense in most passages, it is an unfortunate mistranslation of the term. The real difficulty of the term is seen in the inability of almost all English translations to find a consistent equivalent or even a small group of high-frequency equivalents for the term. The kjv alone uses over 28 different English terms for this one Hebrew word. The problem with the English term “soul” is that no actual equivalent of the term or the idea behind it is represented in the Hebrew language. The Hebrew system of thought does not include the combination or opposition of the terms “body” and “soul,” which are really Greek and Latin in origin. The Hebrew contrasts two other concepts which are not found in the Greek and Latin tradition: “the inner self” and “the outer appearance” or, as viewed in a different context, “what one is to oneself” as opposed to “what one appears to be to one’s observers.” The inner person is nepesh, while the outer person, or reputation, is shēm, most commonly translated “name.” In narrative or historical passages of the Old Testament, nepesh can be translated as “life” or “self,” as in Lev. 17:11: “For the life of the flesh is in the blood: and I have given it to you upon the altar to make an atonement for [yourselves]….” Needless to say, the reading “soul” is meaningless in such a text.

But the situation in the numerous parallel poetic passages in which the term appears is much more difficult. The Greek Septuagint and the Latin Vulgate both simply use the Greek and Latin equivalent “soul,” especially in the Psalms. The first occurrence is in Psa. 3:2: “Many are saying of my soul, There is no deliverance for him in God” (nasb). The next occurrence is in Psa. 6:3: “And my soul is greatly dismayed; But Thou, O Lord, how long?” (nasb). In both passages the parallel contrast is between nepesh and some aspect of the self, expressed as “him” in Psa. 3:2 and not expressed but understood in Psa. 6:3. There is no distinction as to whether it appears as an “A” or “B” word in the parallelism. However, since Hebrew rejects repeating the same noun in both halves of a poetic line, nepesh is often used as the parallel for the speaker, primary personal subject, and even for God, as in Psa. 11:5: “The Lord trieth the righteous: but the wicked and him that loveth violence [he himself] hateth.” Such passages are frequent, and a proper understanding of the word enlightens many well-known passages, such as Psa. 119:109: “My life is continually in my hand, Yet I do not forget Thy law” (nasb).

The versions vary widely in their readings of nepesh, with the more contemporary versions casting widely for meanings.

Usage Notes:Nāpash means “to breathe; respire; be refreshed.” This verb, which is apparently related to the noun nepesh, appears 3 times in the Old Testament (Exod. 23:12; Exod. 31:17). The other appearance is in 2 Sam. 16:14: “And the king, and all the people that were with him, came weary, and refreshed themselves there.”

“7then the Lord God formed the man of dust from the ground and breathed into his nostrils the breath of life, and the man became a living creature.” (Genesis 2:7, ESV

“7Then the Lord God formed the man from the dust of the earth and blew the breath of life into his nostrils. The man became a living being.” (Genesis 2:7, GW

“7And Jehovah God formed man of the dust of the ground, and breathed into his nostrils the breath of life; and man became a living soul.” (Genesis 2:7, ASV 1901)

“7Then the Lord God formed man of dust from the ground, and breathed into his nostrils the breath of life; and man became a living being.” (Genesis 2:7, NASB95)

“7And the Lord God formed man of the dust of the ground, and breathed into his nostrils the breath of life; and man became a living soul.” (Genesis 2:7, KJV 1900)

“7And the Lord God formed man of the dust of the ground, and breathed into his nostrils the breath of life; and man became a living being.” (Genesis 2:7, NKJV)

“7God formed Man out of dirt from the ground and blew into his nostrils the breath of life. The Man came alive—a living soul!” (Genesis 2:7, The Message)

Terrible suggested translation:  Like Psalm 42 “ As the deer pants…My soul thirsts for you” the original meaning is Hebrew is “my throat thirsts for you.”

“1As a deer pants for flowing streams, so pants my soul for you, O God. 2My soul thirsts for God, for the living God. When shall I come and appear before God?” (Psalm 42:1–2, ESV)

Aside from the root fallacy there’s the fact this is a metaphor. The writer is comparing a deer’s thirst for water need to survive with his soul’s (self, inner person, etc.) need for God.  The physical is contrasted with the spiritual.

Literally, it was never intended as “throat,”  That’s horrible and reflects a misunderstanding of metaphor and language as well.

My soul is saved because I am saved! In the end I’ll be reunited with my body, but that body will be changed.

So yes, you ARE a soul who inhabits a body and in the end Christ will redeem both!