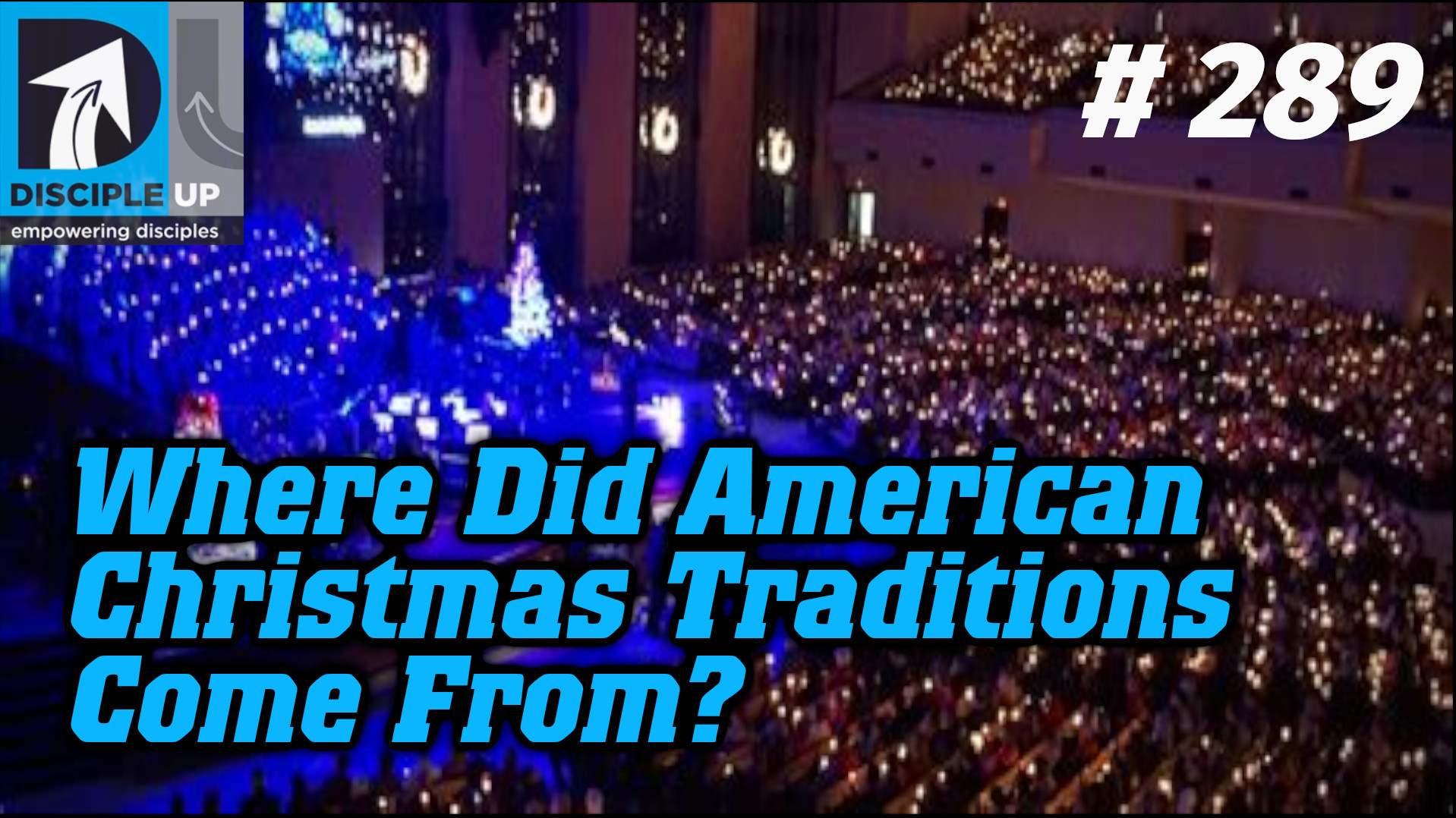 Older Christmas Episodes You Might Want to Listen to:

Conservative evangelical Christians have sometimes been eager advocates of the modern campaign to “keep Christ in Christmas” and preserve the traditional religious meaning of the holiday.

There’s one major problem with this campaign: The original religious message behind the American Christmas was not evangelical at all.

Instead, it was the creation of Unitarians, Episcopalians, and other liberal Protestants who had little interest in several key tenets of the evangelical understanding of the gospel.

Those of us who are evangelical in our faith can still have a merry Christmas. But if we want to do so in a way that foregrounds the gospel, we may have to discover a new approach to the holiday that does more than simply preserve the old.

…As Penne Restad describes in Christmas in America: A History, early 19th-century New England Congregationalist children whose parents ignored Christmas marveled when the Episcopalians in their towns wrapped their church buildings in garlands of greenery and gathered to sing on Christmas morning. Some of them expressed a longing for a little of this Christmas cheer. The yearning became more acute when German Lutheran immigrants brought new Christmas traditions to America—especially the Christmas tree and Santa Claus.

…Evangelicals who believe in the gospel of the Incarnation cannot therefore find much comfort in public campaigns to replace “Happy Holidays” with “Merry Christmas” or set up creches in the town square. What we need is not a return to the 1950s or even the Victorian era but rather a recovery of wonder at the incarnate God coming to earth in the form of a baby in order to save humanity.

Daniel K. Williams is a professor of history at the University of West Georgia and the author of Defenders of the Unborn: The Pro-Life Movement Before Roe v. Wade. 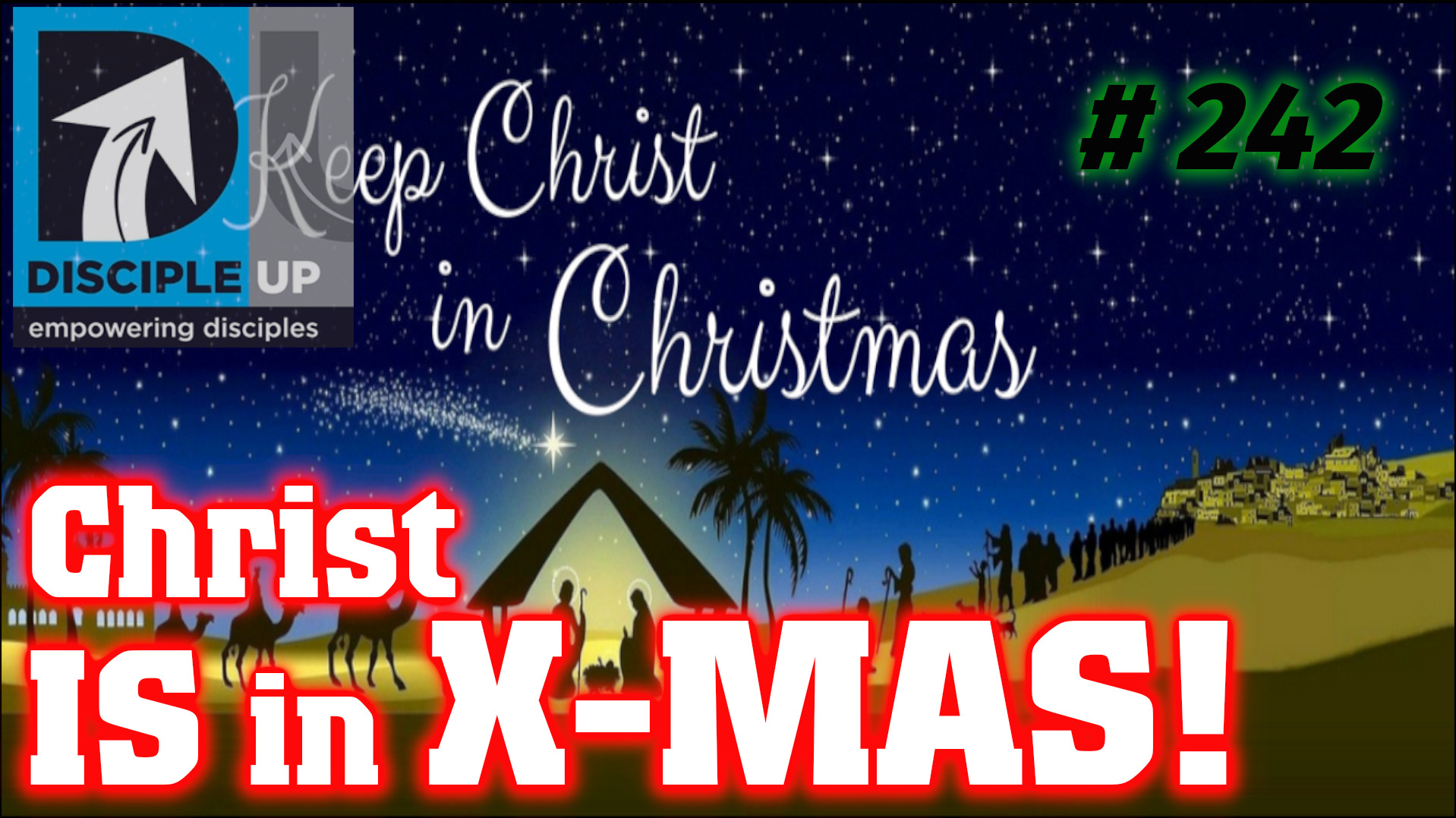 I am repeating Episode 88 because I think there’s still a lot of Christians out there who don’t understand this when they need too.

The episode on Boxing Day 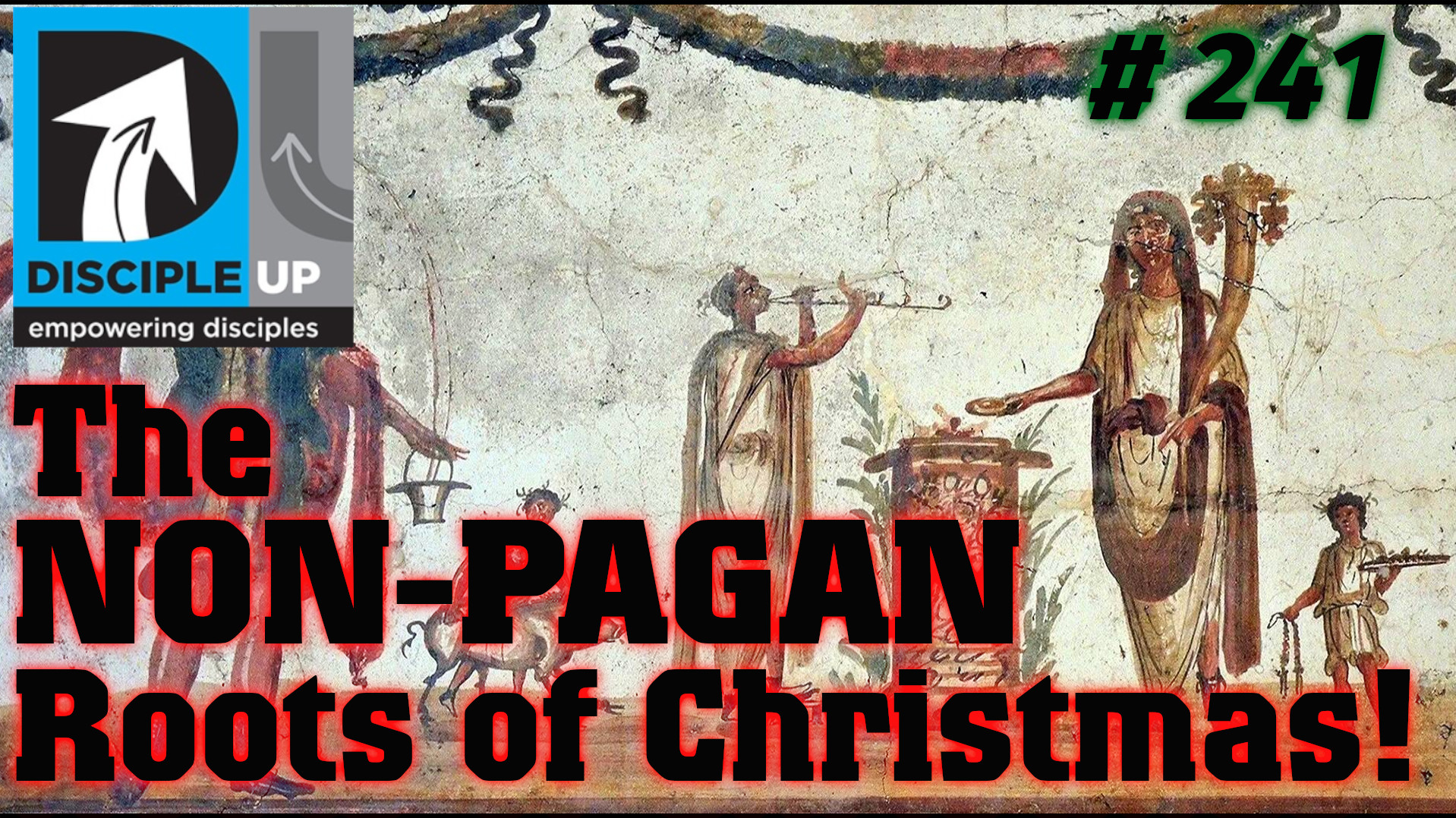 I’m re-presenting this episode for the following reasons. 1) It’s Christmas time! 2) Most people still cling to the wrong and disproved idea that Christmas is based on a pagan holiday. 3) I’m tired and want a break! Hope you enjoy! – Louie

Christmas wasn’t “borrowed” from a pagan holiday at all! 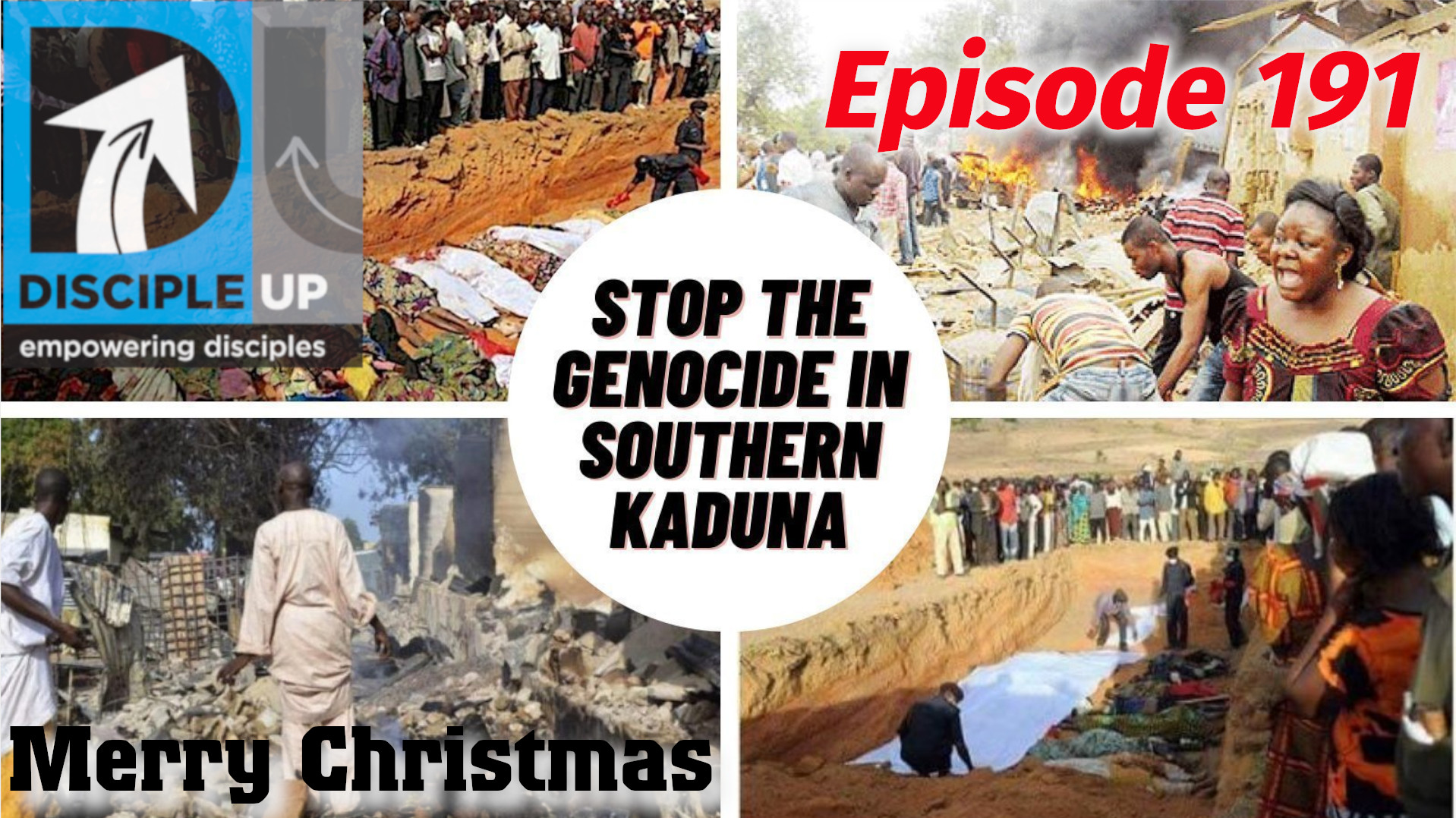 Episode 36: Tales From the Scrypt – the Christmas Story

Episode 87: The Non-Pagan Roots of Christmas

Episode 88: Christ IS In X-Mas

Episode 139: The Real Meaning of Christmas and Other Christmas Stuff 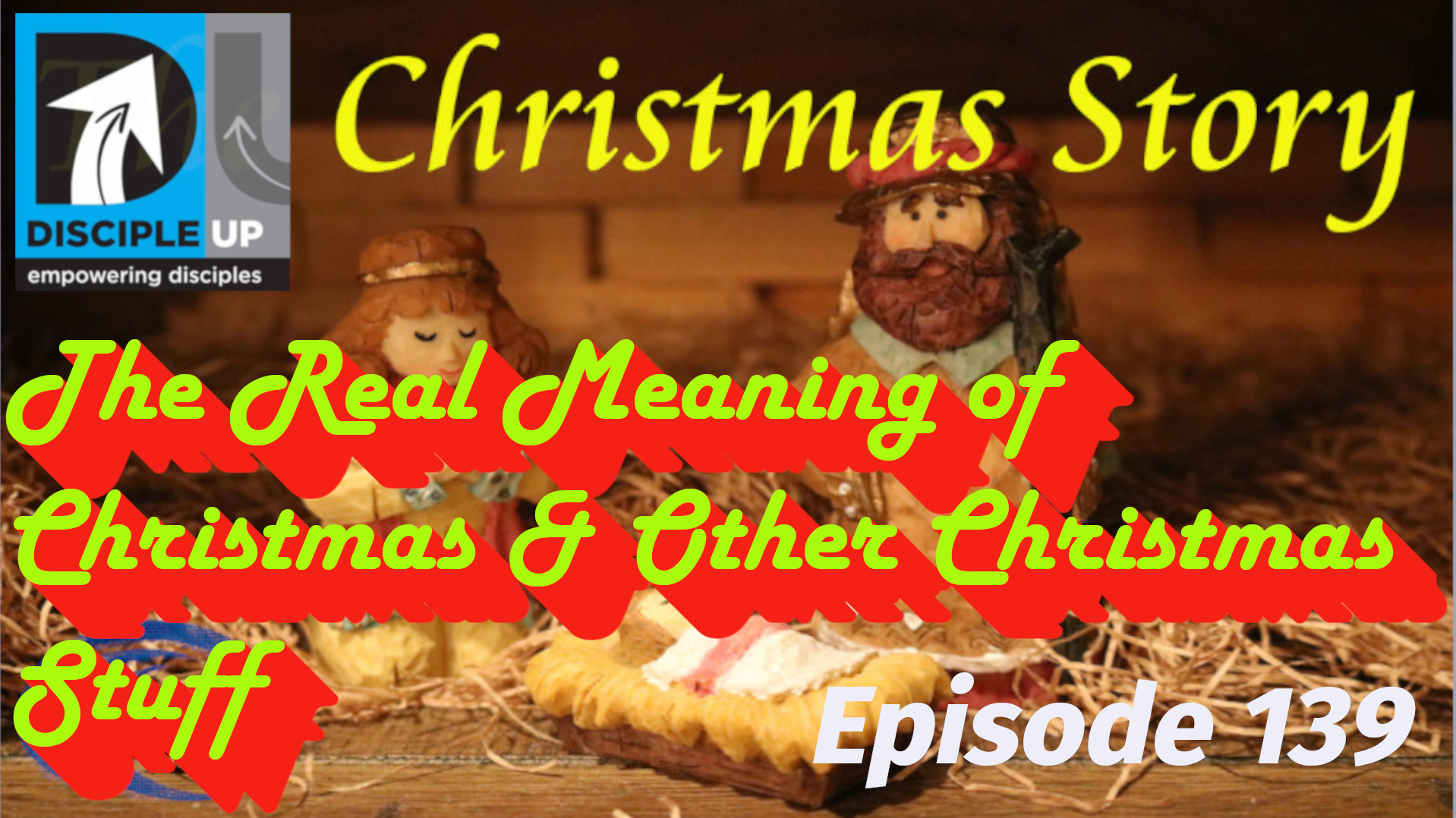 Past Shows on Christmas:

Disciple Up #87 – Non-Pagan Roots of Christmas

A Christmas Story Part One – written for my radio show, Tales From the Scrypt, which airs each Wednesday on KLPZ, 1380 AM here in Parker. Available at 1380.com on the web. 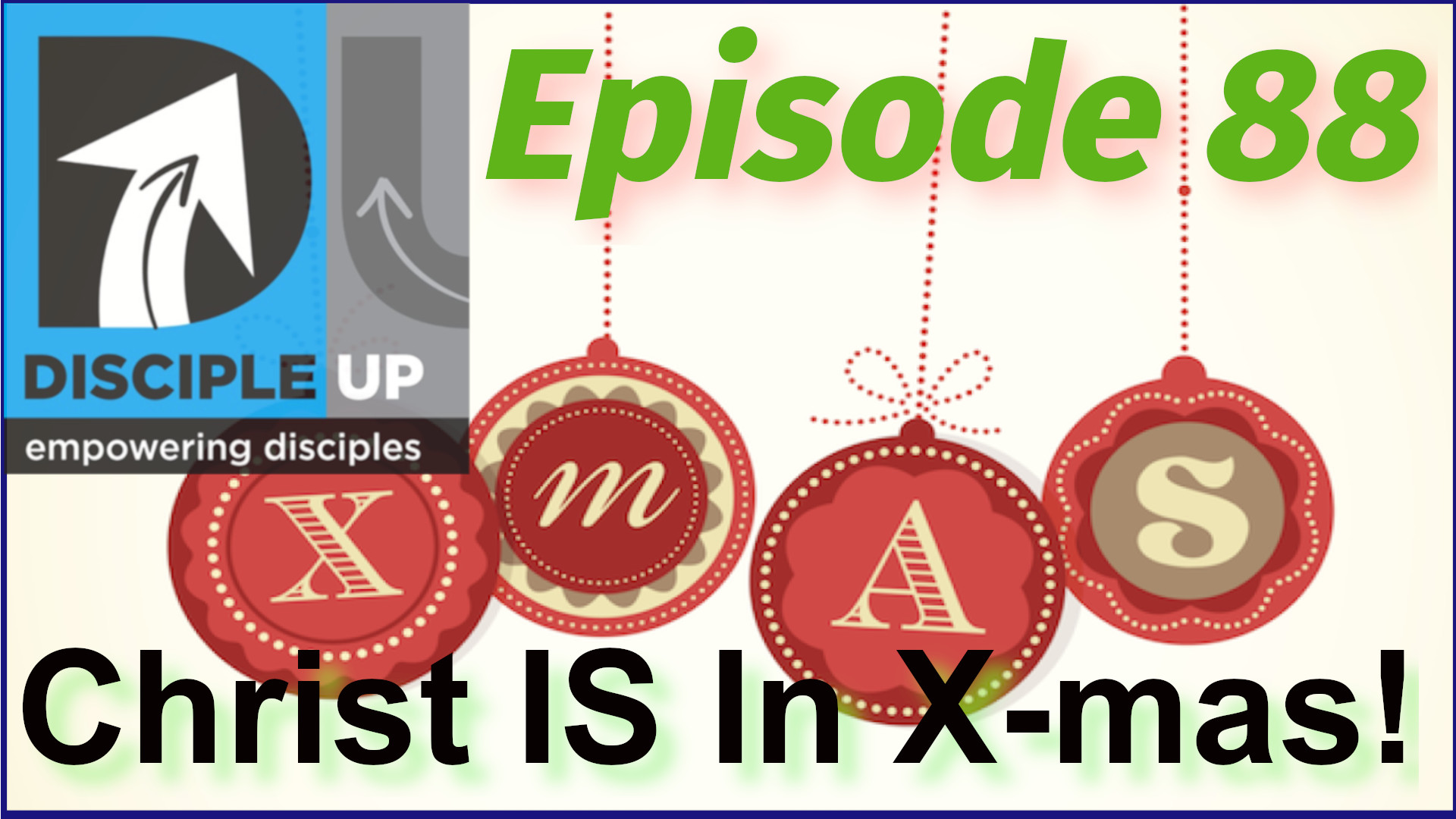 The episode on Boxing Day 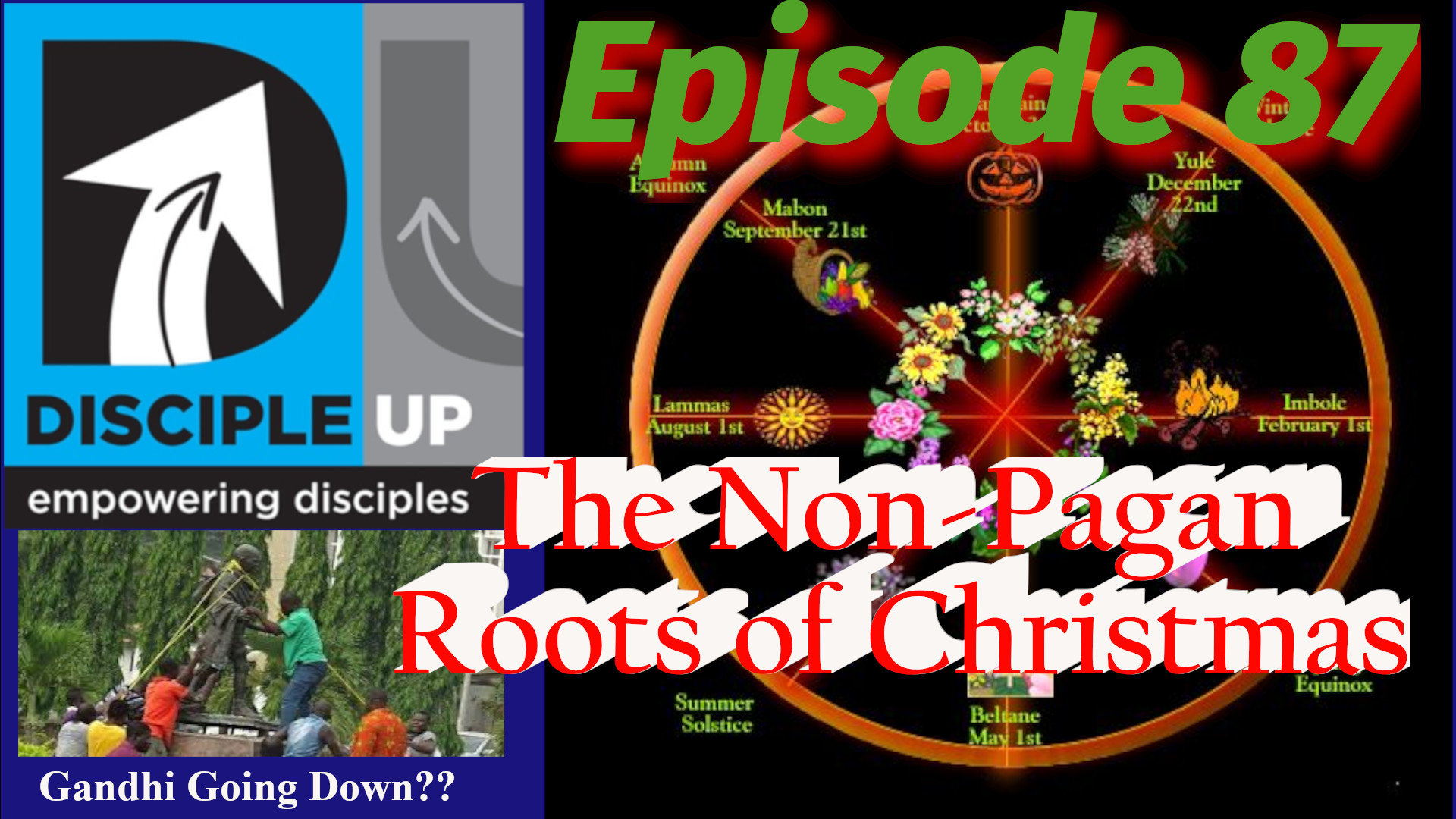 The Non-Pagan Roots of Christmas

Everyday in the Spirit

Christmas wasn’t “borrowed” from a pagan holiday at all! 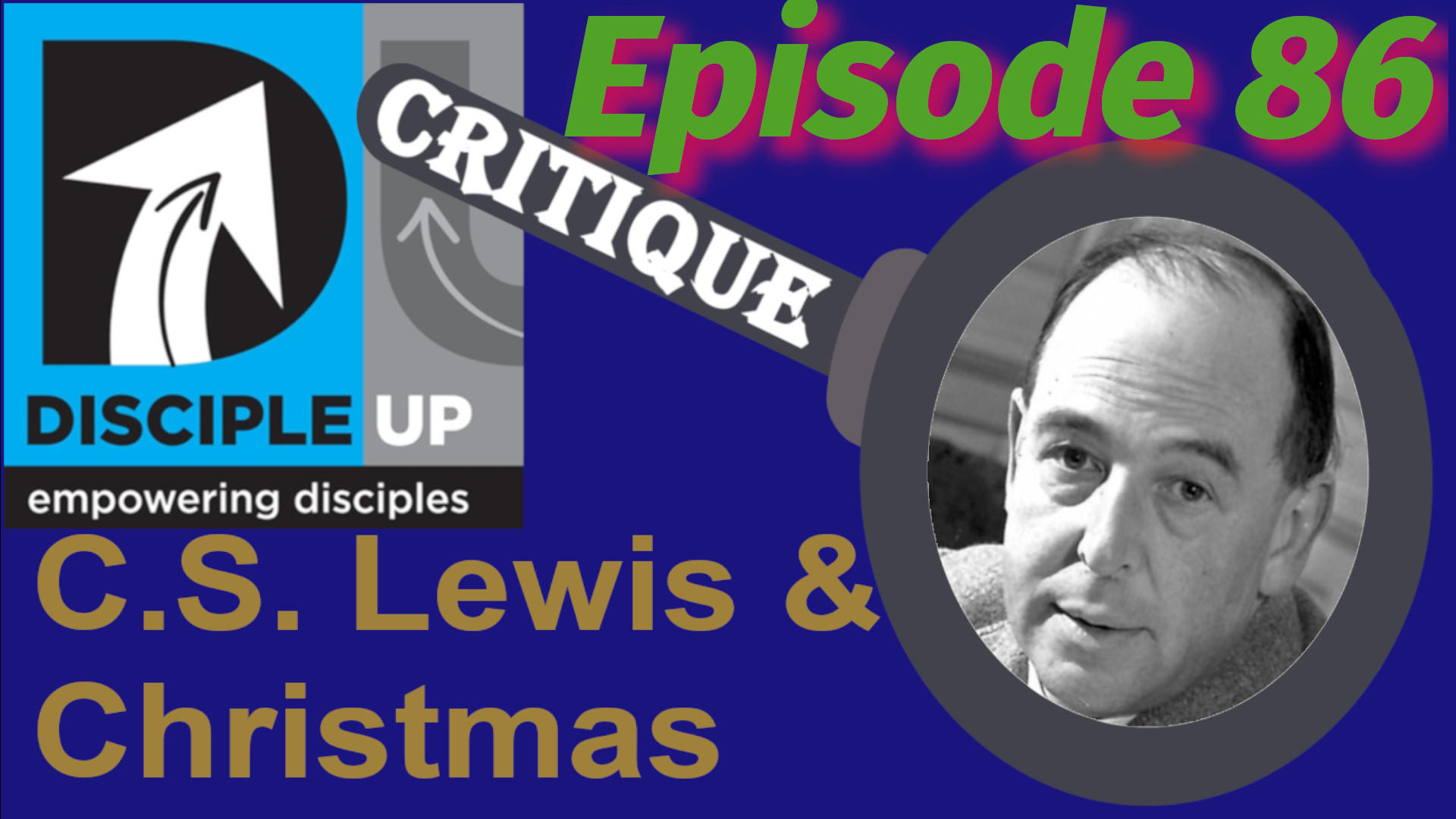 From the book God in the Dock: https://goo.gl/yUXebu

This episode of Disciple Up is a special Christmas edition features me reading the scripts I have written and recorded for air on KLPZ, 1380 AM right here in Parker. Each week I do a short form, prerecorded, radio show called Tales From the Scrypt, Stories You Can Believe In.

This episode we are featuring all five of the scripts I’ve written that comprise the Christmas Story. I hope you not only enjoy these but find your knowledge increased and your faith built up this Christmas Season.

Thanks for listening, God bless you and please help me spread the word about this podcast. 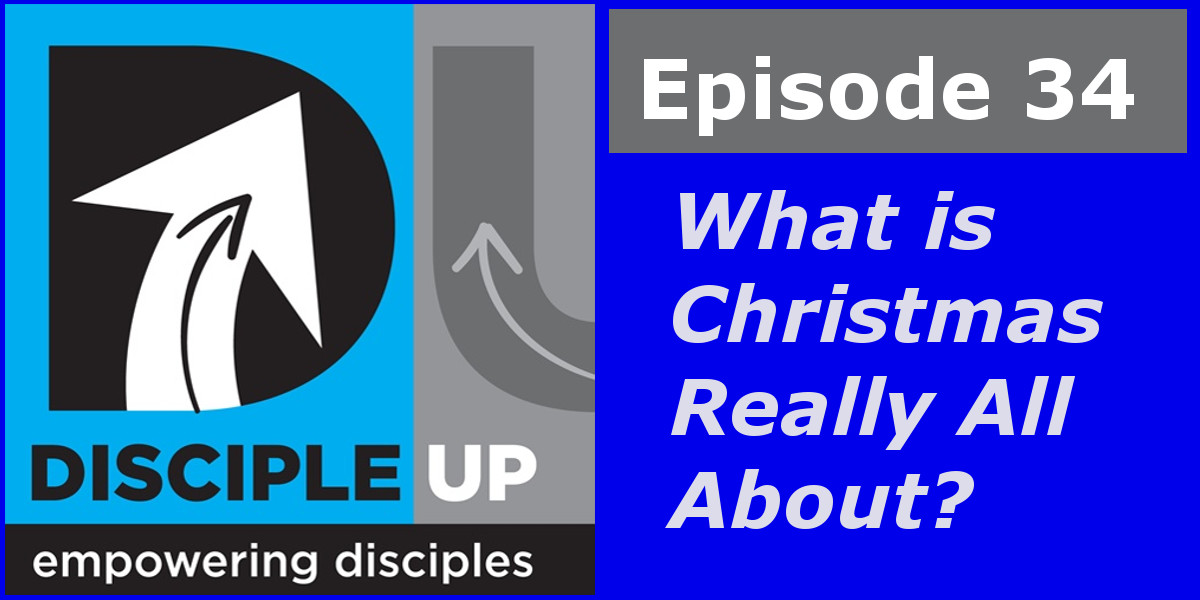 The first recorded date of Christmas being celebrated on December 25th was in 336, during the time of the Roman Emperor Constantine (he was the first Christian Roman Emperor). A few years later, Pope Julius I officially declared that the birth of Jesus would be celebrated on the 25th December.

Info from the book Christmas: A Biography,  by Judith Flanders.

Flanders begins her biography of Christmas with the early church observances of Christ’s nativity, where the name and calendar date of the holiday have their beginnings. But she insists that the role of religion is often overemphasized in accounts of the holiday’s origin. Independently of the Christian holiday, midwinter celebrations had long been held in Greek, Roman, British, and Germanic lands. From the start, there was never one Christmas. Instead, Christmas has always meant many things.
The modern observance of Christmas—marked by familial, commercial, nostalgic, sentimental, and religious elements—began to take shape in the late 18th century. Consider the Philadelphia Quaker Elizabeth Drinker, who kept a diary throughout the second half of the 1700s. Her earliest entries show that she, like her fellow Quakers, did not initially recognize or partake in the holiday. Over the next 20 years, we find spotty references to the activities of neighbors on “Christmass, so call’d.” But by the end of the century, we see her shamelessly celebrating with family dinners and visits from friends. Christmas, so it seems, sort of crept up on her.
by the late 1700s, as Elizabeth Drinker was writing in her diary, the old practices were already giving way to new traditions, such as decorating the home with holly, ivy, and kissing boughs made of mistletoe. The first decorated indoor Christmas tree appeared as early as 1605 in Strasbourg, France, but the practice only attained widespread popularity in the late 1700s and early 1800s. Indoor trees came with particular perils to the host home since they would be fitted with candles to be lit on Christmas Eve. The effect was both delightful and dangerous.

Gift-giving was not new to the modern age. The old practice followed the expectations of hierarchal protocol—social superiors gave Christmas boxes and monetary tips to their employees, servants, and various tradespeople. At the other end of the social scales, tenants offered fowl and fresh meat to their landlords. Such hierarchical gifts punctuated differences in social and economic status. But, by the early 19th century, gift-giving began to soften with the new emphasis on home and family. Parents gave to their children presents of books, nuts, wood-carved toys, and ribbons.
Around the same time, newly popularized carols spread from Germany to England, France, and the Americas. The habit of young carousers wassailing from door to door for money or mead gave way to church choirs and neighborhood caroling groups. Lyrics concomitantly shifted from making merry and imbibing deeply to Christ’s birth and wistful domesticity. In Flanders’s words, the new tradition “took what was secular and made it religious; and, most importantly, took what was working class and of the street and made it middle-class and of the hearth and home.”
Take Christmas cards, for example. An invention of the mid-19th century, the first card printed in the United States illustrated Santa Claus with a family opening gifts. The holiday message read, Pease’s Great Varety [sic] Store in the Temple of Fancy. The card was nothing more than a commercial advertisement. A survey of the more than 100,000 cards in circulation before 1890 reveals that religious images, such as the Nativity scene, appeared on extremely few. The majority featured “holly, mistletoe and Christmas pudding, Father Christmas or Santa, Christmas trees, bells and robins, food and festivity.” Biblical or religious themes on holiday cards were numerically “insignificant.”

Christmas is the spirit of giving without a thought of getting. It is happiness because we see joy in people. It is forgetting self and finding time for others. It is discarding the meaningless and stressing the true values. Thomas S. Monson

Christmas is a season not only of rejoicing but of reflection. Winston Churchill

Christmas waves a magic wand over this world, and behold, everything is softer and more beautiful. Norman Vincent Peale

Christmas is the season of joy, of holiday greetings exchanged, of gift-giving, and of families united. – Norman Vincent Peale

Christmas is doing a little something extra for someone. Charles M. Schulz

Don’t let the past steal your present. This is the message of Christmas: We are never alone. Taylor Caldwell

I don’t think Christmas is necessarily about things. It’s about being good to one another, it’s about the Christian ethic, it’s about kindness. Carrie Fisher

What Is Christmas Really All About?

What I hear all the time from Christians and non-Christians alike is that Christmas is all about family.

Don’t care how you answer the question.

But I’d love to know HOW you know that, or WHY you believe that.

I’m not criticizing or disagreeing, I’m asking an epistemological question. HOW to you know WHAT you know (or think you know at any rate).

but in your hearts honor Christ the Lord as holy, always being prepared to make a defense to anyone who asks you for a reason for the hope that is in you; yet do it with gentleness and respect, I Peter 3:15 (ESV)