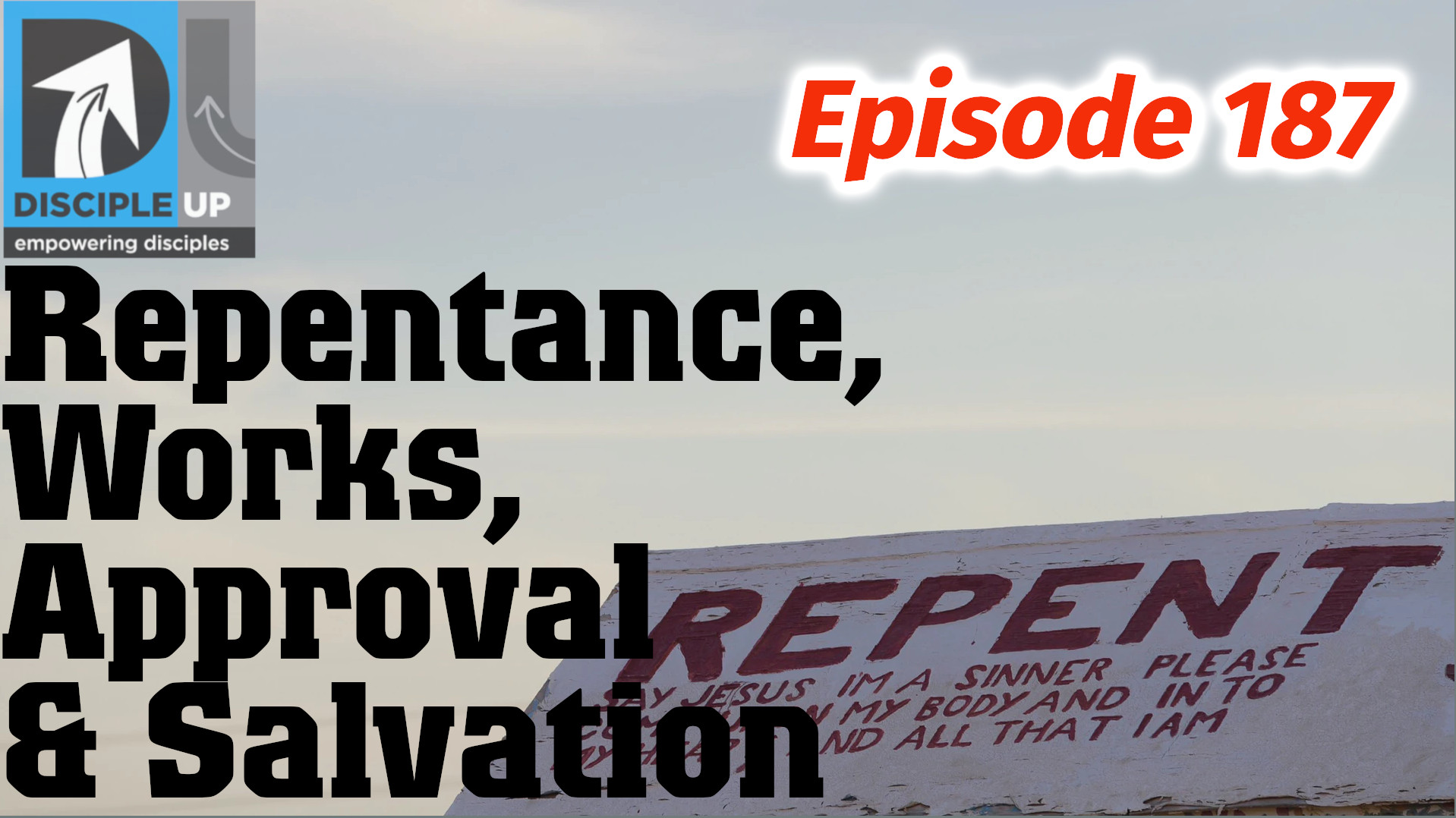 An E-mail comes in:

Hello louie this is josh again and I have been struggling to understand this topic that I have came apon concerning ones salvation. The topic is a few questions, are we saved in just believing in christ or Is repentance required for salvation? Roman’s 10:9-13. In this passage Paul does not mention repentance as a need for salvation. Is believing enough or is there more we need to do to be saved?

What got me thinking about this was this video I watched on this topic, which I would like for you to watch and see if what his is saying is right

If You Do Well Video: https://www.youtube.com/watch?v=NOAdqrvjUn0&feature=youtu.be

“The Great deception among most Professed Christians is they refuse to recognize that Patient Continuance in Doing Well is the determining factor on whether or not they will enter the Kingdom of God. They think Salvation is a Package deal, that once they ‘receive Jesus forgiveness of past, present and future sins is assured and nothing they do or don’t do from that point forward has any bearing on the outcome of their inheritance of eternal life. Under the ‘not of works’, collective reasoning ‘doing well’ may be a by-product of Faith, but its never a necessity in that ‘NOT doing well will disqualify them form the Kingdom.”

Mistakes – “he told Cain to do well which he wouldn’t have done if he had a sin nature.” BUT Jesus regularly told people who were fallen to “go and sin not.” Plus later he says the whole structure of the Scriptures is God telling us to do well, but that contradicts which said about Cain.

“God expects an increase of His grace.”  What does that even mean? How can you or I increase God’s grace since that comes from him and is a part of him?

This is based on a misunderstanding of the Old Testament Covenants (yes, there were more than one) and the New Testament covenant of Jesus.

“21And he said to her, “What do you want?” She said to him, “Say that these two sons of mine are to sit, one at your right hand and one at your left, in your kingdom.” 22Jesus answered, “You do not know what you are asking. Are you able to drink the cup that I am to drink?” They said to him, “We are able.” 23He said to them, “You will drink my cup, but to sit at my right hand and at my left is not mine to grant, but it is for those for whom it has been prepared by my Father.”” (Matthew 20:21–23, ESV)

– when the passage proves the opposite! Great example of Is eisegesis – forming an opinion and then forcing it upon the text.

He either doesn’t know about or ignores one of the primary rules of interpretation of Scripture which is: You interpret the Old Testament in light of the New Testament. Not the other way around, which is what he does.

He points out that in the OT you had to work to be saved or in the kingdom, then he quotes Jesus to support this (mangling His words as seen above) and then concludes he’s right. He forgets or ignores that Jesus lived under the Old Covenant and spoke to people who lived under it too!

It’s not till He rises from the grave that the New Covenant takes effect.

They FAILED when they betrayed Christ!

I’m not saying he’s bad or evil or is deliberately trying to mislead. I am saying he’s wrong, woefully wrong and in a way that anyone who’s taken even ONE class on how to interpret the Bible ought to be able to see.

Watch out for Proof Texting

A proof text is a passage of scripture presented as proof for a theological doctrine, belief, or principle.  Proof texting (sometimes “proof-texting” or “proof texting”) is the practice of using isolated, out-of-context quotations from a document to establish a proposition in eisegesis (introducing one’s own presuppositions, agendas, or biases). Such quotes may not accurately reflect the original intent of the author, and a document quoted in such a manner, when read as a whole, may not support the proposition for which it was cited. The term has currency primarily in theological and exegetical circles.

“8But what does it say? “The word is near you, in your mouth and in your heart” (that is, the word of faith that we proclaim); 9because, if you confess with your mouth that Jesus is Lord and believe in your heart that God raised him from the dead, you will be saved. 10For with the heart one believes and is justified, and with the mouth one confesses and is saved. 11For the Scripture says, “Everyone who believes in him will not be put to shame.”” (Romans 10:8–11, ESV)

Notice that this doesn’t mention repentance. So is it really necessary? Proof texters would say this proves it’s not important! But they taking the wrong approach. You need to look at all the verses on this subject and see what they say. Note that this verse doesn’t say you have to ask God to forgive your sins either.

Is that now something we don’t do?

Repentance is one of the things we do, along with believing, confessing and being baptized, that we do when we make Jesus the Lord of our lives.

Honestly and sincerely I don’t know what this means.

“20Now the law came in to increase the trespass, but where sin increased, grace abounded all the more,” (Romans 5:20, ESV)

“15For it is all for your sake, so that as grace extends to more and more people it may increase thanksgiving, to the glory of God.” (2 Corinthians 4:15, ESV)

“6which has come to you, as indeed in the whole world it is bearing fruit and increasing—as it also does among you, since the day you heard it and understood the grace of God in truth,” (Colossians 1:6, ESV)

I already answered this.

“14What good is it, my brothers, if someone says he has faith but does not have works? Can that faith save him? 15If a brother or sister is poorly clothed and lacking in daily food, 16and one of you says to them, “Go in peace, be warmed and filled,” without giving them the things needed for the body, what good is that? 17So also faith by itself, if it does not have works, is dead. 18But someone will say, “You have faith and I have works.” Show me your faith apart from your works, and I will show you my faith by my works. 19You believe that God is one; you do well. Even the demons believe—and shudder!” (James 2:14–19, ESV)

You aren’t saved by works, but your works prove your faith. That’s it and that’s all.

This guys “Doing Well” stuff has another fatal flaw in it that I’ve save for now – HOW DO YOU KNOW WHEN YOU’VE DONE WELL ENOUGH TO BE SAVED?

He gives no standard for us to look too. There’s nothing about that in the Bible. So you are left up on your own never being sure if you are accepted by God or not.

You don’t have to have read much of the NT to see that this kind of insecurity isn’t typical of the language used about salvation. If he’s right then no one can ever know they are saved since they cannot know if they done well enough.